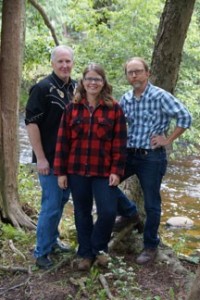 On June 14, Door Community Auditorium will kick off its season with a CD release concert by popular Door County folksinger Katie Dahl. To celebrate the release of her brand-new album, Ordinary Band, Dahl will team up with a band that’s anything but ordinary: Door County’s own Rich Higdon on upright bass, spoons, and washboard, and Memphis flatpicking wizard Eric Lewis on guitar, dobro, and mandolin.

Door County’s own Katie Dahl is a folk singer-songwriter whose career is quickly expanding beyond the peninsula where she makes her home. Known for her intelligent songwriting, powerful alto, and engaging performance style, Dahl sings original songs with a careful sense of craft and a strong sense of place. Dahl has won numerous contests for her songwriting, including Big Top Chautauqua Songwriter of the Year, and on Ordinary Band she has surpassed even her own high songwriting standards.

The CD release concert is underwritten by Paula W. Keller.

From 6 – 6:45 pm on June 14, prior to Dahl’s concert, DCA will host a reception featuring light refreshments, a demonstration of DCA’s new Hearing Loop system, and a reading by Door County Poet Laureate Ralph Murre. This event will commemorate the successful completion of Phase I of DCA’s ongoing Sounds Great! campaign (which led to the installation of the new Hearing Loop system). The reception also honors the transformation of the DCA Link Gallery into a gallery that features exclusively children’s art, and the unveiling of a brand new mural in the gallery by Door County artist Ram Rojas. The pre-concert reception is free and open to the public.