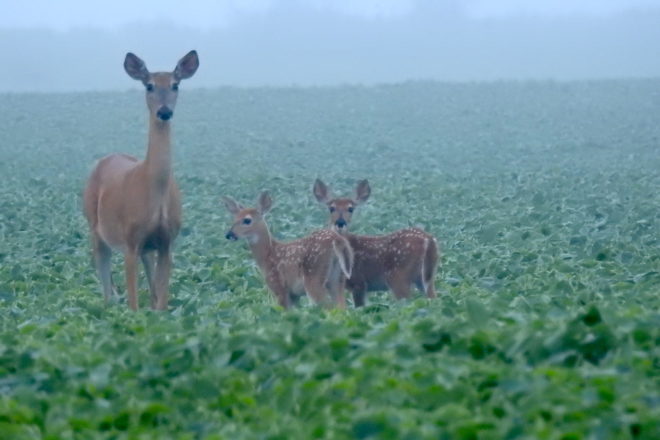 Doe and twin fawn sightings have been common on the Kewaunee/Door peninsula this summer. Kevin Naze photographed this group in July on a foggy evening near Lake Michigan between Algoma and Sturgeon Bay.

Howie’s Tackle and Archery in Sturgeon Bay is a busy place these days as bow and crossbow deer hunters prepare for opening day on Sept. 14.

“We’ve got everything for the crossbow or vertical compound bow hunter,” owner Mike Richard said.

In recent weeks, it’s been a mix of new bow or crossbow purchases and repair or replacement of strings and cables on older equipment, plus sales of arrows, bolts, broadheads and other accessories.

Richard said there are always two waves of activity at the shop. First up are the diehards who are eager to get out there because they want to take a doe for venison right away, or who hope to catch a trophy buck still in its summer pattern. Biting bugs and warm weather don’t deter this group.

The next group waits for a hard frost to kill mosquitoes and the exciting pre-rut and rut activity when mature bucks are more likely to be seen.

Richard said Howie’s can help beginners pick out the right equipment, then make sure it’s all working in the indoor range.

“We do it all here,” Richard said. “It’s just on a smaller scale [than the big-city shops].”

Hunter optimism is high across Door and Kewaunee counties, and an abundance of free antlerless tags – five with each license in Door and four with each in Kewaunee – means those who’ve done their homework should have little trouble seeing whitetails. Motorists have been dodging and hitting deer all summer.

Northeast District Wildlife Supervisor Jeff Pritzl said hunters who are trying to balance the buck-to-doe ratio in their areas may want to target more does early on.

“It’s a long season, and a lot of hunters tend to wait to shoot does,” Pritzl said. “But there’s a good opportunity to get some venison early. Deer wise up and change their patterns relatively quickly.”

It’s hard to say exactly how many combined bow and crossbow users there are today because the individual numbers include crossbow license purchasers who also purchased the bow upgrade, and archery license buyers who purchased the crossbow upgrade. That allows them to use either weapon, though they don’t receive additional harvest tags.

The U.S. Coast Guard released its 2018 Recreational Boating Statistics Report, revealing that there were 633 boating fatalities nationwide in 2018. Wisconsin had 106 accidents, with 21 fatalities and 78 non-fatal injuries. Damages exceeded $600,000.

Alcohol continued to be the leading known contributing factor in fatal boating accidents in 2018, accounting for 100 deaths, or 19 percent of total fatalities. The report also shows that the fatality rate was 5.3 deaths per 100,000 registered recreational vessels, which tied as the third lowest rate in the program’s history. Property damage totaled about $46 million.

Where the cause of death was known, 77 percent of fatal boating accident victims drowned. Of those victims, 84 percent were not wearing a life jacket. Some involved inflatable life jackets that had expired cartridges or life jackets that were not buckled, thus making them ineffective as lifesaving devices.

Where boating instruction was known, 74 percent of deaths occurred on vessels where the operator had not received boating-safety instruction.

Where vessel type was known, the vessel types with the highest percentage of deaths were open motorboats (50 percent), kayaks (13.5 percent) and canoes (7 percent).

The Coast Guard reminds all boaters to wear a life jacket, take a boating-safety course, attach the engine cut-off switch, get a free vessel safety check and boat sober.