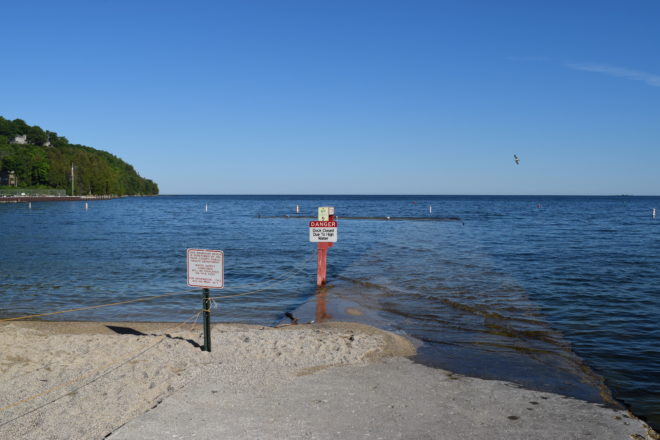 Lake levels have eclipsed the dock at the Sister Bay beach. Photo by Solomon Lindenberg.

In recent years, rising lake levels have plagued many of Door County’s lakeside businesses and residences in the form of truncated beaches, eroded shorelines and submerged docks and piers.

While many people are scrambling to combat flooding and damage to infrastructure, climate scientists are working to find out what has been causing the latest rise in lake levels. According to Jack Williams, a UW-Madison geography professor and climate-change expert, it’s the billion-dollar question.

“We can’t yet definitively say,” Williams said. “What we know is that we are seeing increasing temperatures and variability of rainfall, which are both known to be caused by climate change.”

Lake levels rise when the amounts of precipitation and runoff are greater than the amount of evaporation. Conversely, lake levels drop when evaporation levels exceed the inflow. According to Madeline Magee, Great Lakes and Mississippi River monitoring coordinator for the Wisconsin Department of Natural Resources, this concept is called “net basin supply.”

“Looking over the last six years or so of the measured net basin supply, the Great Lakes overall have seen a lot more water coming in from precipitation and runoff than leaving as evaporation,” Magee said. “This consistently positive net basin supply has driven the high lake levels that we have seen recently.”

According to the National Oceanic and Atmospheric Administration, Lake Michigan rose an additional 15 inches last year and hit record highs set in 1986 (see the accompanying graph). Additionally, the U.S. Army Corps of Engineers reported that Lake Michigan’s levels are up four inches from last year.

“If you look at a map of their watershed, they are almost entirely their own watershed, and what that means is that the lakes are almost like a big pot of water,” he said. “When you rain on the pot, the water level goes up, and when it’s warm, you have a lot of heat evaporation.”

In smaller lakes, there is usually water filtering into and slow movement throughout the groundwater table. This is largely untrue about the Great Lakes.

“When you have a small lake and a big watershed, that lake doesn’t tend to go up and down as much,” Williams said. “When you have a big lake and a small watershed like the Great Lakes, you tend to have much more of these bigger rises and falls. They’re much more sensitive to changes in rainfall and evaporation.”

“The Great Lakes region is predicted to have increases in precipitation and an increased number of extreme precipitation events,” Magee said. “However, from a regional standpoint, we also expect that when we do have droughts or dry periods, those will be more significant.”

Magee said indications have shown that global climate change has affected water levels and will continue to do so, but the correlation isn’t exhibited by just the high water. Rather, she said, climate change will increase the variability of the levels.

“Based on evidence and models that we have available so far, the expectation is that we will likely have higher highs and lower lows,” she said. “And the change between those high and low periods may happen more quickly.”

Furthermore, scientists are saying that climate change is leading to increased occurrences of extreme events. One example is when the polar vortex at the North Pole expands, sending cold air southward into the northern United States. During those extremely cold winters, there may be more ice cover than average, and thus, less evaporation.

According to Magee, predicting how climate change will affect lake levels can be done in a manner similar to other climate-change predictions.

Magee said that developing these models for looking at Great Lakes water levels is still in the early stages. Researchers have some models with predictions, and there is increased interest in developing additional models and improving existing ones.

Dick Smythe, a scientist and Climate Change Coalition of Door County steering committee member, said that many ideas and theories have been proposed, but there seems to be no single compelling answer to Lake Michigan’s rising level.

“Many factors are players: rainfall, evaporation, temperature, ice cover,” Smythe said. “As far as we know, as of now, there is no direct linkage between rising lake level and climate change.”

Williams said that although much of the work has to be done on the scientific side of predicting water levels, there is still much to do with regard to adapting infrastructure and building bigger stormwater routing systems, such as curb and gutters, to account for bigger rain events and higher lake levels. Those are the only sure ways to counter the unpredictable lakes right now.