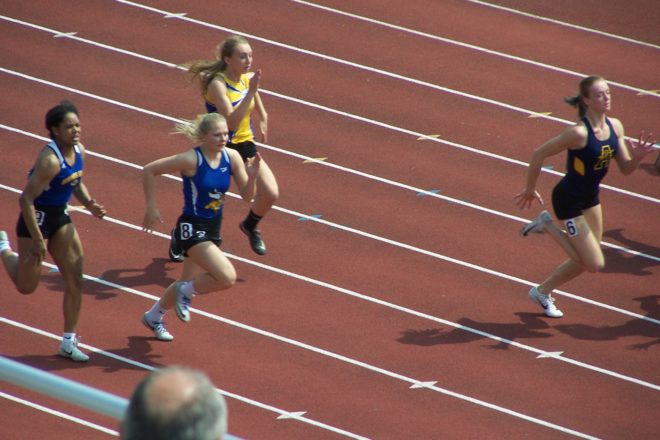 “I’m very happy I was able to get to the podium and medal in both events,” Henry said. “That was the main goal: get medals and break a school record. To end a career on that note is extremely great, and all the hard work paid off.”

Henry’s performance is one of a few solid performances from Door County athletes over the weekend.

The Sevastopol 3,200-meter relay team of Olivia Stenzel, Zoe Kuehn, Mya Ploor and Lizzy Fiscus placed second in Division 3 with a time of 10:00.91, shaving 22 seconds off the time they posted in the sectional meet. Stenzel won a medal in the 800-meter run by placing seventh with a time of 2:22.07.

“We were worried about being in the slow heat [at state],” Stenzel admitted. “While we were warming up for our run, we were motivating each other and saying how we have to give this everything we’ve got. Last year at state, we got a 10:05, and we all wanted to get 10:00. When I crossed the finish line and saw our time, it was extremely gratifying. Next year, we are going for our school record. This race definitely motivated us and showed us how much we can accomplish when we put our minds to it. It made all of the hard work pay off.”

Sturgeon Bay’s Haley Riechers headed into the Division 2 meet with a goal of placing in the top 10 in the high jump and exceeded that with a leap of 5 feet, 2 inches to place fifth.

“Being able to represent my school and place on the podium is one of the best feelings I’ve ever had,” Riechers said.

Sevastopol’s Laci Lautenbach placed fourth in the Division 3 high jump with a leap of 5-2. After missing on two jumps at 5-2, Lautenbach clinched her place by clearing the bar on her third jump.

Sevastopol’s Kiegan Sargent placed sixth in the Division 3 long jump with a leap of 21-5. Sargent improved on his 13th-place finish in last year’s meet and improved on his leap of 20-5 in the sectional meet.

Gibraltar’s Abbi Sitte placed ninth in the Division 3 100-meter dash with a time of 12.89, and teammate Abbey Fitzgerald placed 12th in the long jump with a leap of 15-7.