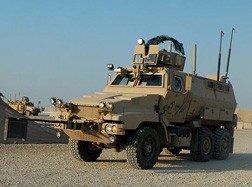 The Door County Sheriff’s Department joins several other law enforcement agencies around the state to benefit from the winding down of Operation Enduring Freedom in Afghanistan.

Suddenly the U.S. Department of Defense (DOD) has a surplus of used armored vehicles, one of which will be coming to the Door County Sheriff’s Department in May through the DOD’s 1033 Program, which allows the free transfer of excess DOD property to state and local law enforcement agencies.

The vehicles are known as MRAPs – Mine-Resistant, Ambush-Protected vehicles. The Pentagon ordered 24,000 MRAPs for U.S. and coalition forces in response to roadside bombings in Iraq and Afghanistan.

The Caiman Armored Vehicle the department is getting on May 19 has a Caterpillar C7 turbocharged, 370 horsepower engine.

“What it is, is an armored rescue vehicle if we have someone pinned down, injured or whatever,” said Sheriff Terry Vogel. “We had this basically given to us except for the transportation costs. It’s another tool in our toolbox. We are seeing more and more usage for something like that. Within the last month, we had two incidents where we would have used it. It’s about the safety for the citizens and the officers. This is a vehicle that gives us more options as far as safety issues.”

Vogel said the vehicle will be ready to roll when it arrives.

“There is basically nothing we have to do with it,” he said. “We will probably paint it to more of a sheriff’s department color and add Door County Sheriff’s Department Rescue Unit on the side. I would like to start training with it as soon as we get it in.”