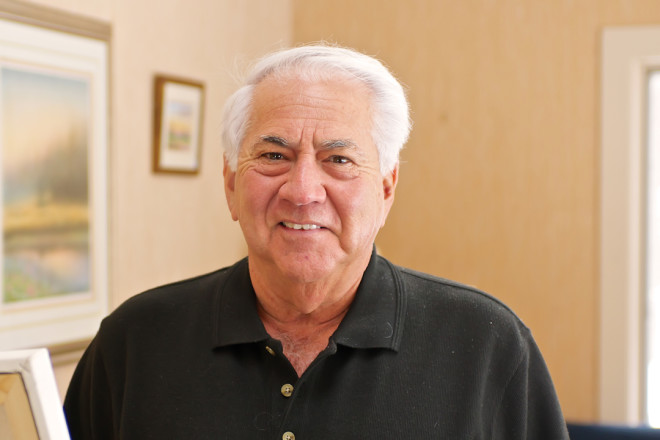 This spring, Arnold Alaniz will auction off “Autumn Twilight,” a piece of work depicting a peaceful Door County scene, featuring the distinctive pastel palette the seasoned artist is known for not only throughout the county, but the world. He describes his artwork as a “soft realism with a bit of romanticism.” “‘Autumn Twilight’ is a scene inspired by walking tours in Door County,” explains Ellison Bay summer resident Alaniz. “It’s exclusive for Channel 10.” 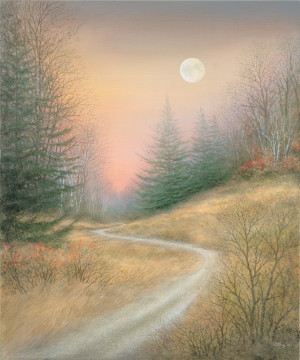 This is not the first original piece of work Alaniz has donated to Channel 10, also known as Milwaukee Public Television. Almost 35 years ago, Alaniz – then a budding artist in Door County about to buy a little shop to exhibit his art in Ephraim’s Sherwood Village – donated a limited edition lithograph for auction and before he knew it, he was a celebrity.

“You never plan it,” he says of his sudden thrust into fame, “it just happens.” A year later his work was on display in more than 1,000 galleries. Two years later, his work was in 2,400 galleries throughout the world.

“It was insane,” Alaniz laughs. “I had an apartment in New York, shows in Tokyo, Paris, everywhere! And it was all because of the publicity on Channel 10. I got to meet all these great artists, and they have the same hang ups and ideas and fears and goals as the rest of us.”

Alaniz, a Texas native, admits he never set out for the whirlwind art career that befell him. In fact, he never set out to be an artist, or attend college, but college students were exempt from the draft to serve in the Vietnam War. So on scholarship, Alaniz attended the University of Wisconsin – Madison and planned to become a teacher. When a professor noticed his natural talent for drawing, he encouraged him to switch majors. Alaniz graduated with a bachelor’s degree in fine art and a master’s in print making. 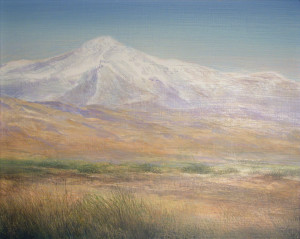 While in Madison, he met the late Charlie Lyons, who introduced him to Door County in 1964. From then he visited the county “sporadically,” making acquaintance with Door County artists including Jack Anderson and Abe Cohn.

After graduating, Alaniz took a job as an art teacher at Homestead High School in Mequon. “I meant to stay until the war was over, but I stayed and one year became two years and then three – I stayed six years. I loved it. But my style was developing and you can’t be fair to the kids when you’re devoted to your own work,” he says. “I thought, ‘I want to be a great artist or a great teacher, I can’t do both.’”

Dismissing the warnings of his friends and family, Alaniz resigned from his teaching job in 1977 and became a full-time artist. “It was scary,” he admits, “but life takes you where it wants you to go. I was always in the right place at the right time.”

In 1979, he was approached by Channel 10 to auction off a lithograph to benefit Milwaukee Public Television and that’s when his career took off. “I was right at the cusp of the big print revolution,” he recalls. “Art was doing really well in the ’80s.” 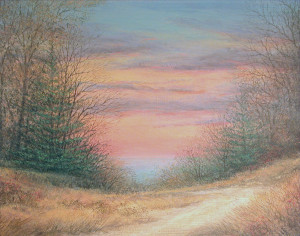 He also believes his success comes from his “look,” as he calls it. “It’s very traditional, soothing, semi-detailed…not really realistic, but realistic enough, with a bit of romanticism.” He modestly thinks of his work as a compromise for couples considering purchasing a piece:  “A husband and wife both want something – he wants deer and rugged landscapes, she wants flowers and something soft – this has both. Well, not the deer, but both,” he laughs.

Alaniz’s forte was lithography when he began his international art career – an art form that requires a painstaking and exacting printing process. “[Lithography] became extinct in the ’90s, during the digital revolution,” he explains. “[Lithography] takes several weeks of work to make one piece of work.”

Now Alaniz paints a scene and from that painting creates giclee prints, which are cheaper than original works of art. “Art has been suffering,” says Alaniz, “The economy’s not good and people 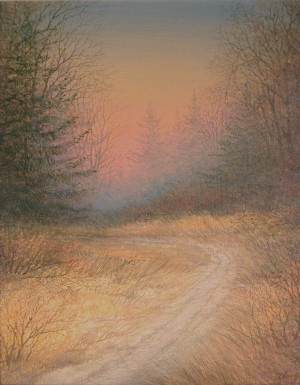 have different priorities than they used to – they’re trying to keep up with all the technology.” He believes that trend is “changing” – the public is showing a renewed interest in art and purchasing art. He also believes creating giclee prints offers a greater opportunity for a wider demographic to purchase artwork.

As for the fame – “It disappears quickly,” he laughs. “I saw a lot of artists struggle with that and just give up on their art. I always stuck with it, always kept painting.”