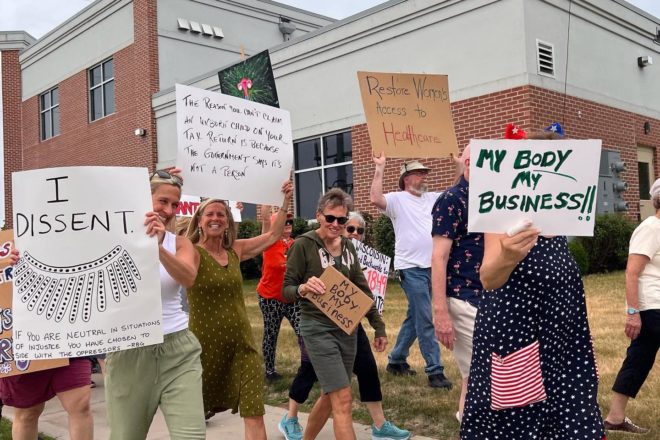 Women’s Walks were held in Sturgeon Bay and Sister Bay this week to to protest the Supreme Court’s decision to overturn Roe v. Wade.

Sturgeon Bay demonstrators gathered in Martin Park and marched across Oregon Street Bridge to Sawyer Park. From there, they marched across the Michigan Street Bridge to 3rd Avenue and back to Martin Park, following the same route as the 2020 Sturgeon Bay Black Lives Matter march. Co-organized by Ash Frank and Kamron Eytcheson, the July 4 protest attracted around 300 protesters. Photos by Stephanie Skiba.

On Tuesday, also to protest the Supreme Court’s decision, at least 250 people took part in the Women’s Walk in Sister Bay. After walking from Peach Barn Brewery to the corner of Highway 42 and Mill Road, demonstrators held signs and chanted slogans, garnering support from many cars and pedestrians passing by. There were no counter-protests, but a small number of passersby gave the crowd a thumbs down or made comments as they walked past. Photo by Myles Dannhausen Jr.

(From left) Emma Cox, Sarah White and Abby Duebler, who co-organized the Women’s Walk in Sister Bay, said the turnout exceeded their best expectations. “The support from people and local businesses has been incredible,” White said. Cox said she hopes the walk is a catalyst for a women’s activism group and engages the local community in the issue. Photo by Myles Dannhausen Jr.

“It’s not up to the government what a woman can do with her body,” said Gills Rock resident Mary O’Grady. The mother of two adult children said she “can’t believe they have to go through this fight again because five people on the Supreme Court made a decision for the bodies of all the women in this country.” Photo by Myles Dannhausen Jr.