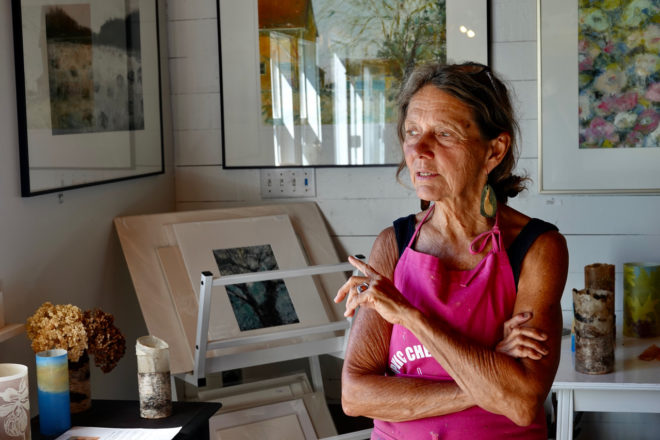 Donna Brown in her studio. Photo by Tom Groenfeldt.

A conversation with Donna Brown

Boredom does not bother Donna Brown for very long. The Sister Bay artist can switch from watercolor to oil to cold wax or monotype printing. And if that’s not enough, she can create sculptures from paper or cloth and encaustic, or design earrings from leaves and twigs found on walks through her land or Door County parks. In a pinch, she can always rework a previously “finished” painting, such as the one of a barn that sits on the floor of her White Barn Gallery a bit south of the AC Tap on Highway 57.

“I should have taken a picture of every version of it,” Brown said. “You know, when they do those X-rays of what’s under a painting. If they did that to this barn, nobody would believe it.”

“So as long as you leave a little bit of the underlying layer and don’t just totally cover it, it’s still part of the process,” she said.

Friends have grown accustomed to Brown’s method of work, which involves reworking a piece, then reworking it again.

Brown worked with encaustic for several years, then realized it would work on paper, which absorbed some of the wax and became translucent. She could hold that paper up to a window to enjoy the image, but then what? She sewed the art pieces into cylinders, which are now ready for placement over a small, round, flat light on a table to become a decorative light. Others are shaped to hang over a wall lamp.

“One thing leads to another,” she said about her creative process.

Brown has won numerous awards in juried shows, and her work resides in Wisconsin collections including those of the Miller Art Museum, Door County Memorial Hospital, Marshfield Clinic, Appleton VA Hospital and Northwestern Mutual Insurance, as well as in private collections across the country.

She and her husband, Errol, moved to Sister Bay from Portland, Oregon, in 1994 and bought a small house and barn on six acres, where they raised a son and daughter, plus numerous pets. For years, they spent part of the winter in Mexico – most recently in Oaxaca, where they built a small house 12 years ago. This year they sold it because the area was becoming too crowded for their liking.

Nearly 30 years’ worth of creative work created between the two locations have generated piles of paper and canvases.

“Creativity is great, but it’s not always the neatest of enterprises,” Brown said. “So at some point, yeah, you have to start over, toss a few things out and clear the decks.”

She sells her work at her studio gallery – open Friday, Saturday and Sunday, 11 am – 3 pm, or by appointment – and through Fine Line Designs in north Ephraim.

Brown enjoys talking to people who visit, especially when they respond to the feeling of her work or want to watch her work.

“When somebody else comes in and can connect to that feeling, there’s something that is extremely special about that,” she said. “It’s the emotion. Art should be emotional.”
And it’s not uncommon for those chance encounters to turn into friendships.

“I’ve made incredible friendships through the interaction of what they like,” Brown said. “Some people have come in for years just to see what I’m doing. They may have a piece they bought 20 years ago. It’s quite interesting because my work has changed so much in terms of style, but they’ve changed, too.”

Although some of her work may be considered controversial and political, taking on issues such as abortion rights, Donald Trump or the environment, most of it is calming.

“One of the nicest things somebody has said about my work was that it is very spiritual,” Brown said. “I had never considered it to be, but I started looking at it and thought, ‘Yeah, maybe it is. It has to do with spirit.’”