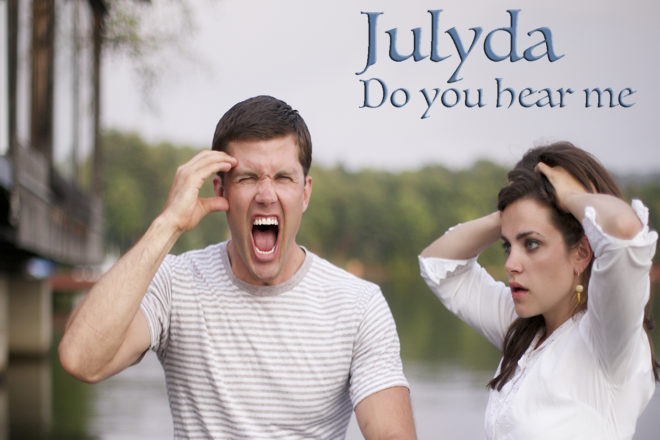 The husband-wife duo Julyda kicks off their Midwest tour celebrating the release of their first record, Do You Hear Me, with a show at Carrington Pub in Egg Harbor from 6-8 pm Saturday, May 26.

Why would the Minneapolis couple perform their first show in Egg Harbor? The performance also serves as a post-dedication party for wrought iron artist Boleslaw Kochanowski, whose crane sculpture is being dedicated at 1:30 pm Saturday on the overlook above Egg Harbor. He is the father of vocalist/cellist Julida Alter, who with husband guitarist Sean Alter, perform as Julyda.

“I want this to be a celebration of what my father did. Let’s all come together and enjoy this time,” she said.

Julyda is actually an offshoot of the six-member band The Blacksmith’s Daughters, which features three sets of married couples – Julida and Sean, Julida’s sister Annella and her husband Brent Platta, and Jeremy and Krista Swider.

Trying to get a six-member band to tour is not easy.

“We just couldn’t travel that much, and never more than an hour away,” Julida said. “We thought, wouldn’t it be fun to have more gigs. We understand that everybody can’t, but we thought, why not us two?”

Last November they started the process that resulted in Do You Hear Me, which will have an official release on June 9, but will be available at the Carrington show.

“It started out as something I was going to do,” Sean said, “but Julida quickly jumped on board.”

“Creating this album has been a crash course in setting up our life together as a married couple,” Julida said. “We both work full-time jobs on opposite shifts from each other. Throughout this project we had to create timelines and expectations, so that we could effectively work as a team even though we don’t have a lot of mutual time together. Every time we rehearse or perform is like a date night.”

“It’s nice having a mobile set up,” Sean said. “It gave me time to develop the songs. I really like the low end of the cello. I really learned a lot about the instrument while recording it. We had a lot of fun intertwining the cello on a couple of songs, more of a rock sound. I like how the cello plays off her voice. I tried to emphasize the lower end of the cello with her soprano voice. They have a separation that intertwines nicely.”

“This project has been completely DIY, many times forcing us to learn new skills,” Julida added. “All of the singing and instruments on this album are just us two. Before this project Sean never played percussion. Four songs on Do You Hear Me highlight his newfound skill. Sean completely recorded, mastered and produced this album, mostly in our little condo, and sometimes in a friend’s house when we needed to be a little loud.”

She added that the do-it-yourself attitude they used to make this recording was inspired by her father.

“I was that little girl who thought dad could make anything because he would,” she said. “If I wanted a treehouse, he doesn’t just build you a treehouse, it has stairs and windows and doors and shingles on it. It’s extravagant. You want something, why don’t you make it? You don’t like the daily grind? Well do something about it. You are capable of doing so much if you just want to do it. Making this happen, even though we’re not young college kids any more, we have a process now that doesn’t cost us a lot. Maybe the money we get back isn’t equal to the time we’ve put in, but it’s just so enjoyable. And it’s affordable for us. We hope that our self-sufficient attitude in this project can inspire others to also pursue their dreams.”