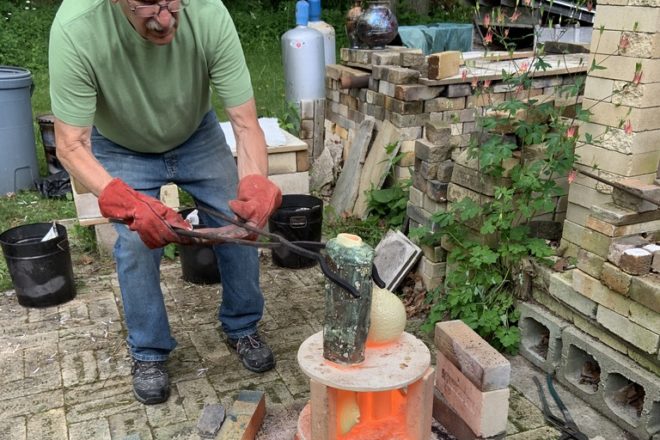 It’s one thing to view the variety of art that fills the many galleries and studios throughout Door County. It’s another to be able to watch the process of art being made. That’s why it’s a lucky thing for visiting and resident art enthusiasts that several local artists offer opportunities to watch them at work, providing a behind-the-scenes look at their studio and process.

During the next few weeks, follow along for a tour of some of the galleries and art studios that offer demonstrations.

When you stop by Ellison Bay Pottery, owned and operated by the spouse team of John Dietrich and Diane McNeil, you may catch Dietrich throwing on the wheel, trimming a previously thrown piece, or, as was the case during the most recent demonstration, attaching handles to coffee mugs.

“It just depends on whatever stage of the process he’s at,” McNeil said. “We might be trimming or glazing, and then you get to see that point in the process. It’s always changing.”

Not only does that provide guests with an opportunity to see something new with every visit, but it also offers a glimpse at the multiple steps involved in creating a single piece of pottery. That’s important because so often, people see only the finished product, McNeil said.

“So few people are doing handmade, so they don’t know all that’s involved,” she added.

Both types of demonstrations become a form of educational outreach for Dietrich and McNeil, in addition to an opportunity to share their passion for hand-thrown pottery with an audience. But the experience doesn’t stop with their medium of choice.

“[A demonstration] creates a better awareness and understanding of how things are made, whether people see a potter or a weaver or a painter,” McNeil said.

Find additional information about upcoming demonstrations and the gallery at ellisonbaypotterystudios.com or by calling 920.740.5859.