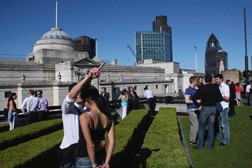 Tom Groenfeldt of Sturgeon Bay will show his photographs at Glas in Sheboygan, sister to the coffee house on the West Side of Sturgeon Bay. In addition to select images of Door County, including last year’s “Tall Ships,” his work includes photographs from Paris and London, in both black and white, and color.

One of Groenfeldt’s favorite painters is Balthus, especially his image “La Rue.” “It shows people in a rather small space going about their lives pretty much oblivious to anyone else. I like shooting pictures of people because the scene is always changing,” said Groenfeldt.

“I have pulled back a little from tightly cropped street images with a short telephoto to try showing more context, although if it isn’t there the picture doesn’t really happen. In London I spent more than an hour shooting Happy Hour with the great light and the Swiss Re Gherkin in the distance. At the hot dog stand, I shot for maybe half an hour and wasn’t sure what I had until I saw the pictures on my computer. I like the motion here.”