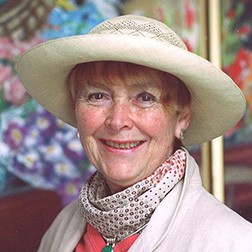 Three years ago, when Franne Dickinson was being interviewed about her success as an artist – she was voted Door County’s Master Artist in 2006 – she mentioned that she hoped to write a book about her work, but that she’d been talking about it for so long that if she ever finished it, she’d have to call it Promises, Promises.

Well, the promised book is a fait accompli, and it is both charming and wise. It is large – 11” x 8-1/2” – and includes full-color reproductions of about 90 of Dickinson’s paintings.

“They dance right through the pages,” she says, “and give it a pulse.”

That alone would make the book a treasure for art lovers. But the writing will endear it to a far wider audience. Its name is not Promises, Promises, but Stay at the Party Long…at Play in the Arts.

Barbara Brown Lee, a prominent member of the Milwaukee Art Museum staff for more than 50 years, has written a mini-review for the back cover.

Anyone who knows Dickinson will not be surprised that she has finally written a book because she’s had a life-long involvement with so many other art disciplines.

“I started dance lessons at four,” she says, “and danced my way through high school and college.”

She appreciates good music and paints to the accompaniment of Mozart or Charles Trenet, a French cabaret singer she met long ago. She majored in literature, with an emphasis on poetry, at the University of Illinois (where she met her husband, Duane) and as a young wife and mother in suburban Milwaukee, spent 13 years with the Brookfield Players as an actress, writer, director and set designer.

As for painting, she claims that despite years on the boards of Artreach Milwaukee and the Milwaukee Art Museum’s Friends of Art, she only “dabbled” in it until Emmett Johns became her mentor at the Peninsula School of Art. So, dancer, lover of music and literature, actress, painter – why not author? It was, she thinks, meant to be. 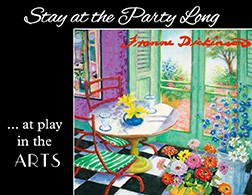 Stay at the Party Long … at Play in the Arts, by Franne Dickinson

What may surprise those who know Dickinson primarily as a painter is how adroitly she has woven together all those other artistic disciplines and their connection to her work. Her words flow as easily as paint from her brush and the dozens of apt quotes reflect her eclectic taste in literature.

“It all started,” she says, “when I was first asked to teach a painting class at the Peninsula Art School in 1998. I was a literature major. I’ve always used color intuitively, without relying on rules or theories. I didn’t know how to tell anyone else to do that.

“If someone had told me I had to sit down and write a book, I could never have done it,” she says.

“First, I had to make a conscious decision to devote all my passion to writing, rather than painting, so I didn’t feel guilty about it. Then the book just came to me. It was a gift. Actually, I didn’t have much to do with it!

“Ideas would wake me up – not in the middle of the night, like when I am painting, but about 6 am. If I didn’t write them down right then, they’d be gone. No time to put on my bathrobe or look for paper; many of those ideas were scribbled on old envelopes from the wastebasket by Duane’s desk, right next to the bed. Sometimes I got up six or eight times in a night and I loved it!

“Over two-and-a-half years, I accumulated hundreds and hundreds of those little thoughts on envelopes and scraps of multi-colored paper. I could have filled a room with them. It was just magical. I’ve always loved painting, but I’ve never enjoyed anything as much as writing this book. It was such a joyous thing to do.

“The point where I had to take deliberate action was sorting it all out. I am used to working with a large format, like a big canvas, so I used sheets of newsprint and wrote with a marker. I could just ‘see’ the book on the paper, the way I can ‘see’ a painting on a blank canvas.” 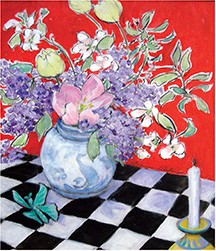 “Oh, we had a good time, even though she had to mush through the snow,” Dickinson says, “and Aerial Pate, editor/graphic designer, just ‘fell from the sky.’ I didn’t know she was back from getting her MFA in Germany, but here she was, and we had a glorious time putting the book together.

“It was so funny – friends back from Florida last spring would ask in this deeply concerned tone, ‘Oh, Franne, how was your winter?’ and I’d say, ‘It was absolutely marvelous. I never in my life had such a great winter!’”

A majority of the paintings in the book are of her specialty – flowers, in pastels, gouache, oil and acrylic. But there are representatives, too, of the deep sisterhood she feels with women, from the street-smart older woman in Mexico to the sextet of women at a Paris flower market to the series of war brides and 1920s flappers to the deeply moving group of five African women, waiting in line at a refugee camp in Darfur.

One of Dickinson’s proudest moments as an artist was when a French woman with a limited grasp of English said, “Your paintings…are…so…glad!”

“Not until then,” Dickinson says, “did I know why I painted.”

Readers will find the same joie de vivre in her book. A friend who read an early proof returned it with this note: “It is delightful, fascinating, inspiring and joyful!”

Books are available at Dickinson’s Toe Path Studio and Gallery, 3014 Anderson Ln. in Ephraim. For those who have always been curious about its name, there is, of course, a story.

“We were in a tea shop in Alfriston, England, in 1981,” Dickinson says, “and an old gentleman offered us a tour of the countryside. He kept saying, ‘There’s a toe path to this town. There’s a toe path to that town.’ The next day, we took a toe path through fields and over stiles to the next town, only to find the local pub packed at 10 am on Sunday morning. We wanted our Toe Path Studio to have that kind of communal spirit.”