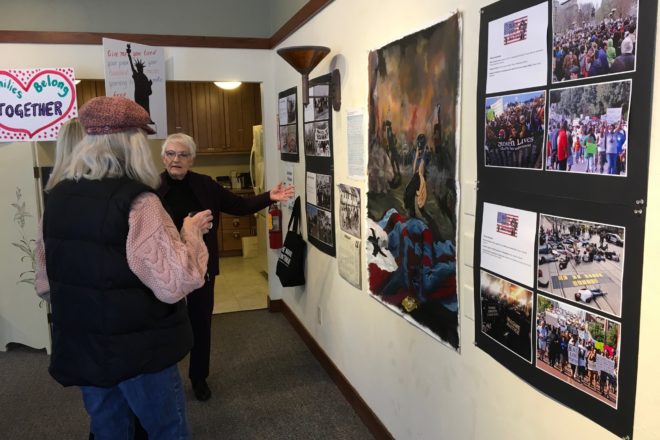 The “Protest!” exhibit at the UU Gallery inspires thought and triggers memories. Photo by Thomas Toerpe.

Works in traditional media – a painting by DarRen Morris, a wood relief by Roger Benedict, three textile wall hangings and a bank of poems – are the exceptions rather than the rule. Curated by Karon Winzenz and Kathleen Toerpe, this show features art in the “vernacular”: made by those who can speak its language and use its techniques but have decided to use those tools not for aesthetic contemplation, but to enhance their messages. It is, of course, unusually full of words.

The works on display until March 31 are mostly signs, banners and photographs gathered by members and friends of the Unitarian Universalist Fellowship of Door County during the past 50 years. A few pieces (buttons for campaigns and causes, a banner and clothing) were commercially produced, but most were made by hand for specific events.

These pieces appear in the context of several overarching concerns: the price of war, treatment of immigrants, abrogation of human and civil rights, environmental degradation, lack of respect for women and people of color, the spread of hatred throughout our land and world. Brief statements that address these themes accompany historic photographs of events where artifacts of the kind on display were used as instruments of protest.

Although some of the signs are rendered beautifully – with skilled calligraphy or iconic images – the power of the exhibit lies in the energy conveyed by the choices of color, placement of words and images for emphasis, and indications of the creator’s passion in the strokes used to form the messages. For example, one heartfelt response to received wisdom, written quickly in black on a gold background, reverses the well-known prayer to accept the things one cannot change, asking instead for the courage to change what one cannot accept. There is food for thought of this kind on every wall of the gallery, and the art spills out into the entry hall as if it cannot be contained.

Seventeen poems by Door County poets – mounted together on one wall, with additional poems in a binder on a table beneath the display – encourage the viewer to hear the voices of individual protesters behind the signs and banners. Viewers are also encouraged to write their own responses to the artifacts and add memories of their own experiences on sticky notes that may be placed anywhere on the walls, thereby confirming the value of participation in this social form of art. Ample demonstrations of the seven principles that organize Unitarian Universalist thought are also evident.