Even a person with zero interest in art would be hard-pressed not to fall into a heady sort of “art lust” with the energy and vibrancy of Charlene’s Gallery Ten.

The story of Gallery Ten begins in Rockford, IL in 1987. Ten artists – three men and seven women, hence the name Gallery Ten – created the gallery as a co-op effort. Charlene Berg was not one of those original ten founders, but says she “was discovered” by the group a year later.

“I had owned a custom frame shop since 1985, so I think they looked at me as someone who would be able to be the businesswoman of the bunch,” she smiles. Berg and the other artists all had day jobs and would run Gallery Ten as a side project.

“As Gallery Ten grew, the artists involved started to drop out,” Berg says. “It became too much for them to run a gallery and create art all at the same time. On the other hand, I realized that I had grown to love art so much that I physically could not live without it, so I took over the gallery.” 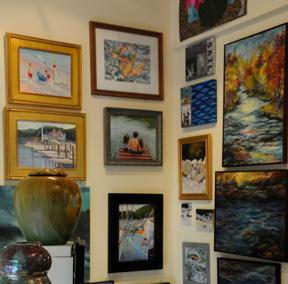 It was around this time that Berg’s husband, Dewey, began thinking about the possibility of retirement. “We kept asking ourselves, ‘Do we really want to retire in Rockford?’ and the answer was always a resounding ‘no.’ We wanted to get out and live somewhere else,” says Berg.

Charlene and Dewey had come up to Door County many times to stay with their friends Wally and Donna, who at the time owned Starry Night Gallery in Gills Rock. “We had come up to Door County for a three-day weekend,” says Berg. “One night, we were sitting on the dock in Gills Rock, and I said to him, ‘You know, we should really move up here.’ And he looked at me and said, ‘we should – but I can’t imagine you leaving your gallery.’ The next day we got back to Rockford, he went back to work, and I called up a realtor and put my gallery space up for sale.”

Of course, since art had grown into Berg’s obsession, she was eager to find an appropriate space in Door County that would be able to house Gallery Ten. A local realtor lined up seven places for the Bergs to look at. Berg sheepishly admits that she wasn’t even really sure what she was looking for.

“I did know that I wanted to have a red door,” she laughs, “but honestly, that’s all that I knew.”

The seventh and last place the realtor showed them was at their present location on Highway 42 in Gills Rock. 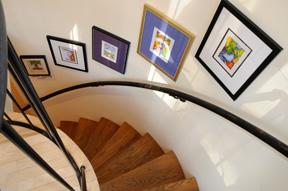 So perfect, in fact, that when Berg called her parents to tell them of their good fortune, she realized that she didn’t quite know all the nuances of her new space.

“My parents were the ones asking all the practical questions. My mom asked me if it had a nice kitchen, and I remember having to ask Dewey if it actually had a kitchen – all I cared about was the space for the art!”

Berg’s new life moved forward quickly, with the selling of her Rockford gallery and frame shop and the purchase of the new building in Gills Rock all happening in a few short months over the winter of 1996/1997.

Berg says that while it was terrifying to close one gallery and open another in such a short period of time, she admits that it was in fact, a blessing – with the whirlwind chain of events, she didn’t have time to be scared – or doubt her decisions.

“I immediately called all of the artists I dealt with in Rockford,” Berg says. “Luckily, they were more than happy to continue showing their work in my Door County gallery. It was a bit crazy, though – even though we planned to retire in Door County, Dewey was still finishing his job in Rockford, so I was doing everything by myself.” 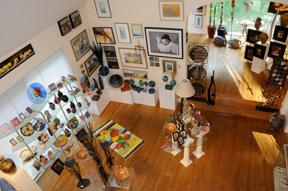 Berg’s early goal with the Rockford gallery – and one that translated into her efforts with the Door County space – was a simple one: to make art as accessible as possible. And not just to art lovers or collectors, but to everyone. Berg’s husband Dewey had a surprise way to make this possible.

“The first few years I ran the gallery, Dewey was still in Rockford – he hadn’t quite got around to retiring yet,” Berg laughs. “But eventually he realized that I was making enough money to support him, so he moved up here! But restlessness set in quickly, and he realized that he needed a project.” This boredom translated into the opening of GT Coffee in 2003.

With the opening of the coffee shop, Charlene saw her business double. “I’ve found that coffee serves as a security blanket for many of my gallery patrons,” she says. “People are much more comfortable looking around with a warm beverage in their hand.” The shop has also served as a place for discussion and potential negotiation of a particular piece that is for sale in the gallery. “Customers are able to discuss a work of art in private,” Berg says, “without having to whisper about it in a corner.”

The coffee shop definitely helps with the gallery’s accessibility, but the majority of the credit in this respect needs to be given to Berg herself. During my interview, we both pace around the gallery several times, Berg talking animatedly about how she has come to know these artists, and her honest love for every single piece in her gallery.

“I know that my passion is not for everyone,” Berg says, “but I think there can be an appreciation of art even on the smallest level.” For her, the greatest thing about being an art lover and purveyor is that exhilarating sense of discovery.

“I love representing emerging artists – and they don’t always have to be young people. Many times my greatest finds have been older people who are just beginning to find their artistic voice, or people who have always dabbled in art but have never had a formal show. They put their souls up on my walls, and on my shelves – and I love the friendships that occur as a result.”

These are friendships that inevitably occur between Berg and her patrons as well. “I want people to come here and take their time, ask questions, and most of all, be themselves,” she says. “It’s art with a comfort zone. What could be better than that?”