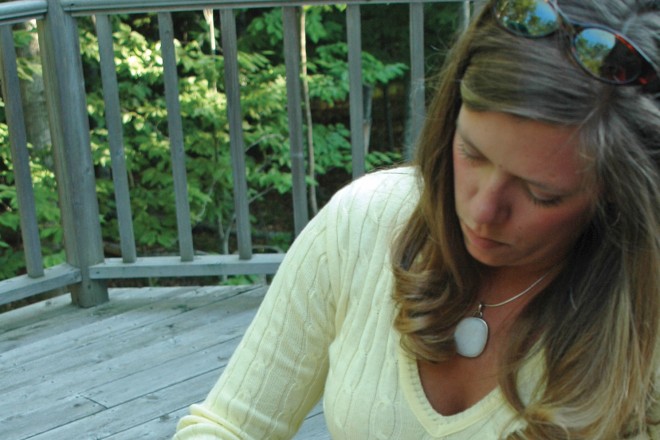 Franne Dickinson, renowned and beloved Door County artist, answered the phone one day to discover her excited 21 year-old granddaughter Jennifer calling from Ohio saying, “Guess what I just discovered, I think I might be an artist!” Jennifer who had been playing around with sketching realized that she liked the picture she had just drawn and, in fact, was proud of it. “That was the magic ‘aha’ moment when I knew I could be an artist,” she says. Two years later she moved to Door County to actively pursue her career.

Jennifer was familiar with Door County from visiting her grandparents as a child, and in her teens she’d spent a summer and fall working for the American Folklore Theatre. She knew she was headed for the right environment to nurture and develop her craft. “I always thought Door County would be a creative place to live and a great place for healing because it’s full of good energy,” says Jennifer. Her mother had moved from Maine a year earlier following the end of a relationship, so a three-generational support system was in place.

That  was in 2003 and by the beginning of 2007 Jennifer was working a year-round job at J.J.’s/La Puerta Mexican restaurant in Sister Bay, had purchased a home in Ellison Bay to share with her mom, was exhibiting at the Paint Box Gallery, had a one-person show at Gallery Ten in Gills Rock, and perhaps most significantly was selected as one of four Emerging Artists for 2006. This prestigious program, created by the Peninsula Art School (PAS), recognizes talented young artists giving them the opportunity to grow, thrive, and establish a foothold in the Door County arts community. According to the PAS brochure, the candidates must possess outstanding artistic merit, vision, and a high level of professional excellence, as well as an interest in serving their community. The school provides free tuition to its Business of Art Symposium, free workshops, complimentary membership to the Door County Art League and six months of mentoring with established local artists.

The recognition that comes to these Emerging Artists is enormous. When Jennifer sold nearly all of her work at the final exhibit, she knew she was on her way. “I was walking on air that day,” she says. “People continued to contact me even after the show so I’d take my work to their homes when some of the paintings were still wet. I even have a collector now who has nine of my pieces. Talk about feeling accepted!”

Jennifer’s family has always been supportive in every area of her life, encouraging creativity and never passing judgment. Franne, whom she calls “Molly,” began taking her to museums and galleries as a child. When she was older they traveled to Paris and to Monet’s home in Giverny. Franne shared that Jennifer, at age four, looked at each and every painting in a gallery they once visited in Pittsburg together. “I would talk philosophy and religion and she would actually listen,” says Franne. “She was ‘born grown’ and all of the visual experiences we have shared have resulted in a special bond.” Recently the pair took in the Pissarro exhibit in Milwaukee and on the way home Franne noticed, “Every place I looked I saw a landscape – there was one that looked French and Jennifer and I noticed it at the same time. We both remarked how great it is that we have our own French landscapes right here in Door County.”

Although this special artistic bond exists between them, their art is very different. Jennifer says that “we honor one another’s attitude, style and perspective.” Rather than give any specific instructions to the newly declared artist upon her arrival in Door County, Franne steered her granddaughter to Wendell Arneson, a fellow teacher at PAS who shares Franne’s mantra:  “Keep it loose!” Jennifer considers Wendell her mentor and credits him with “her thinking outside the box and honoring your own special symbols.”

“He doesn’t teach you how to paint; he wants you to express who you are through your work,” she says. “Nothing is good or bad, it’s just that this particular painting would be more interesting if such and such were done.” The first year Franne signed her up, Jennifer found herself in a class with advanced students although she had never had an art class in her life. “Here I was sitting around with famous Door County artists like Marjorie Mau and Nancy Sargent,” she relates. “Afterwards I met my family at the Bayside for lunch and just cried!” But in typical Jennifer fashion, she went back the next day and did so well that when the course ended, a PAS visitor wanted to buy one of the pieces she had painted.

Jennifer calls her process playing with images and forms in space. “I am disappointed with some of the negative, avant-garde, sarcastic communication from many of today’s artists,” she notes. “Things are technically well done but there seems to be a chip on the shoulder, a jaded tone. It’s all too exclusive and too austere. I like irreverence but not sarcasm. I like fun, wit…that kind of thing. My work has an attitude in it – that tongue-in-cheek sense of finding humor in yourself. It’s a light-hearted energy.”

Even her technique is light-hearted. “It’s a total mystery to me how I paint; I shock myself every time. I don’t sketch first. I just grab a paintbrush and I paint. Whatever comes out, that’s what it is,” she explains. “I’ll doodle around until I’ve found a shape that suggests something and that’s when I go along and define it with the hard lines. So it ‘becomes’ within the process…it’s very meditative.”

Before Jennifer moved to Door County she described her painting as that of a spontaneous free spirit, but she didn’t know how to evaluate it. “It was like knowing the alphabet but not knowing how to read,” she says. Today, thanks to her family’s support, her mentor Wendell Arneson and the Emerging Artist experience, she not only evaluates but she is now marketing her work as well.

“I’ve lived in a lot of places, as a child as well as on my own as an adult, so I know what it means to be an urban person and that’s why I love living and working up here. I value the difference,” she says. “It’s so nice to come from a place of safety as I branch out and look for galleries to exhibit my work in cities like Milwaukee or Chicago.” And, there’s no doubt this “emerged artist” is well on her way.