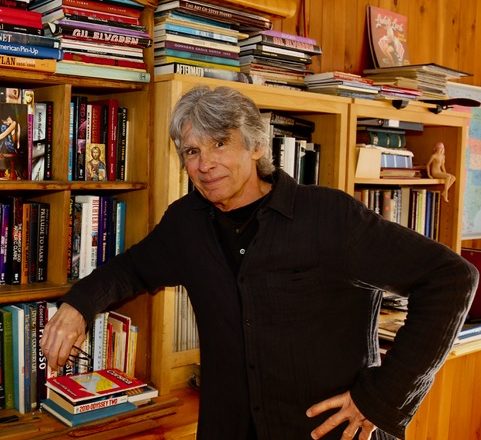 If you were asked to describe Don Thompson, you’d have your work cut out for you. Is he a stained-glass artist, recording musician or wholesale baker?

The answer would likely be all three, and although his passions require plenty of dedication, he manages to find time for them all.

Take his stained-glass work. Thompson works only on commission and estimates he’s created 100-150 pieces during his career. Most recently, he shipped a 32-inch-by-22-inch stained-glass monarch butterfly that he had worked on for more than three years.

The piece, like all good art, has an interesting story behind it.

Thompson was driving home from the Door County Bakery, which he and his wife, Jean, own, when he jokingly asked God to “lend him” one of the many monarchs migrating through the neighborhood.

“I get out of the car, going to the house, and there’s a monarch on the flower next to the door with her wings folded,” Thompson said. “I picked her up, walked in and turned her loose, and she lived with us for six weeks.”

He fed her sugar water in a jar lid and observed her closely as she ate or hung out among the house plants. Thompson’s stained-glass monarch incorporated 151 pieces of glass, with no visible lead. The white spots on the black wings are made of 30-year-old German glass that’s enameled black over white. Careful sandblasting cuts through the black and reveals the small dots of white in the finished piece.

Some may think of a butterfly as an artistic cliché, but Thompson finds spiritual insight in his work.

“So everybody does butterflies. All right, but then to take it to a level where it becomes very spiritual. If you can spend 3,000 hours on this animal and tell me God doesn’t exist or that there isn’t any kind of intelligent design in the universe,” he said, trailing off.

Don and Jean Thompson have an overarching interest in inspiring creativity, so they’ve established the Walk On Arts Foundation on a property they purchased inside Newport State Park. Although they don’t intend to teach, they hope to sponsor the creative spirit.

In addition to Thompson’s art studio, the old barn on his property houses a professional-grade recording studio. He does initial recordings there, then works with Hans Christian at Studio 330 in Sturgeon Bay for the final mastering. Walk On, his third album after 1975’s Juniper, received an enthusiastic review by Jim Lundstrom in the pages of the Peninsula Pulse. Recording under the name Donaldo, Thompson has changed since the first album, Lundstrom said.

“The sensitive hippy has come out of those decades tough as leather and sounding more like a country outlaw than a hippy survivor,” he wrote.

The album is available for purchase at Door County Bakery, which the Thompsons started 20 years ago.

Located on Highway 57 between Sister Bay and Baileys Harbor, the bakery is currently on restricted hours. A takeout window is open on Saturday mornings, but that might expand to two days later in the spring.

Mostly the bakery is operating as a wholesale business preparing Corsica breadsticks, or Stix: crisps made from the bakery’s trademarked Corsica Loaf, which is baked in an $80,000 stone-lined oven complete with a steamer to create the crust.

“We’re following a wholesale business model that I’ve been pursuing for 15 years,” Thompson said. The bread-based crisps are now sold in nearly 50 stores around the state, including Main Street Market in Egg Harbor, EconoFoods and Healthy Way in Sturgeon Bay.

So is he a glass artist, musician or baker? Thompson seems to be leaving it to the universe, and that has worked out pretty well so far – although the three pursuits do have some advantageous interplay.

“My music led me to my first commission,” Thompson said. “Here I am doing a performance in a lounge – I think it was in Burlington, Iowa – and this couple that would frequent my shows, I was having a drink with them, and they said they were building a home, and did I know anybody who could draw a stained-glass window?”

Thompson volunteered, and after a year, he had to have a tough conversation with himself.

“I’d better get serious about which I am doing,” he said. “Am I gonna produce music or produce glass? Then I decided after about a year of struggling with that question that I would just let the telephone tell me.”

He’s still answering calls for both.

“And in the interim comes the whole culinary aspect of our lives and the Corsica brand, but it all ties into the creative spirit,” Thompson said. Right now he’s working on a jingle for the Door County Bakery.