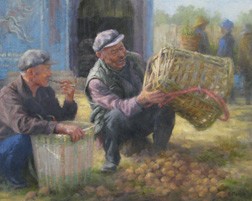 Linden Gallery announces the opening of “New Works: Facing East Series” an oil painting exhibit by artist Susan Ploughe. Her work has been on display since July 21, and she will informally demonstrate her technique on July 28, 1 – 4 pm.

On the Linden Centre’s China tour in 2008, Ploughe was deeply inspired by the faces she saw. She realized that even without the ability to speak the same language she was clearly seeing universal human traits such as humor, generosity and compassion. Her goal in creating a painting is to figure out how to make the canvas come to life to induce an emotional response. Her goal is to paint her subjects with such life and vitality that the viewer feels as if they have met them too.

Ploughe’s work has received numerous recognition, including the Award for Artistic Excellence from the Oil Painters of America Show in 2012. She also paints in the Door County Plein Air Festival, where she a featured artist for 2013.