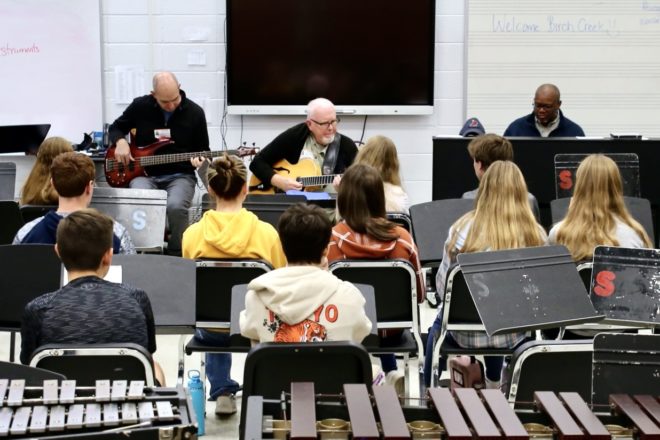 Started in 2002, the program seeks to get local students interested in music in general, and involved at Birch Creek Music Performance Center more specifically, according to Thomas, a pianist. Before the program began, many of Birch Creek’s summer classes were filled with students from Illinois and other parts of Wisconsin, but few from the local area.

“So why not try to get into the schools, where we can have direct contact with the students, and hopefully have that as a doorway to get them to the Birch Creek campus?” Thomas asked.

Although each school visit shares the same goal, the members of the trio adjust their approach to every classroom they enter. In elementary schools, for example, they focus on playing music and answering questions, while in high schools, they might direct the school band or give the musicians performance tips. Through the program, Thomas has improvised to a song composed by Washington Island elementary students, played alongside the Sturgeon Bay High School band and much more.

Some of the students the musicians meet through Artists in the Schools go on to pursue musical careers, such as Solomon Lindenberg, whom Thomas met during a program at Gibraltar High School. After the program, Lindenberg got involved at Birch Creek and is now majoring in jazz studies at Chicago’s Columbia College.

“At best, we can inspire people to go into the field of the arts for themselves and just take it as far as they can,” Thomas said.

Though the musicians visit schools to inspire the students, it often works the other way around, according to Haydon, a guitarist.

“It’s always inspiring when someone steps up, and you can tell they’ve got a real passion for music and they want to pursue it,” Haydon said.

In addition to inspiring students, the trio also serves as living proof that students can follow their musical aspirations and succeed, according to Haydon – something he wishes he had had when he was a kid.

During the 1960s, when Haydon was in high school, most “legitimate” music programs still considered the guitar to be a folk instrument, so he received little direction or encouragement as he tried to learn.

“I got most of my experience playing in bars,” Haydon said – but at Birch Creek, a strong sense of community and high-quality instruction ensure that no young musician must do the same.

As difficult as his own musical career sometimes was, Haydon said he always found joy in music. Thomas agreed, saying that he wanted to share that joy with other aspiring musicians.

“We saw in the pandemic – when we were not able to perform or go to performances or experience the arts – just how much the arts mean to our society, how impactful they are on our everyday lives,” Thomas said.