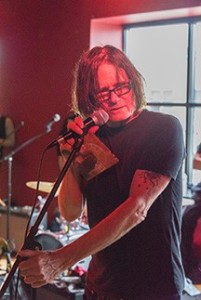 “No self-respecting artist can have anything to do with his own tribute album.”

Joseph Kaftan recalls the night Sturgeon Bay musician pat mAcdonald uttered those words to him – the two men hanging out at Kaftan’s place in Seattle, Washington, and mAcdonald wondering aloud what his next project would be.

It was 2006, just a year after mAcdonald founded the Steel Bridge Songfest in Sturgeon Bay and a year before he would buy the building that would become the Holiday Music Motel. The weeklong collaborative songwriting events that the motel is known for had not yet started, but mAcdonald still had an arsenal of talented musician friends and Kaftan was aware of it.

“I said, ‘You have a ton of amazing songs that not enough people know and you have just as many amazing musician friends,’” Kaftan recalls. “What if you got them to record your songs?”

Kaftan tucked the conversation away into the back of his mind until last December, when the two were in the Holiday Music Motel’s Tambourine Lounge. mAcdonald was practicing for an upcoming acoustic show and Kaftan was asked to call out song requests.

mAcdonald began playing “Weirdness Follows Her Around,” and Kaftan mentioned that Seattle-based singer-songwriter Jimm McIver had wanted to cover it. He was surprised by mAcdonald’s reaction.

“pat proceeded to get a little choked up at the idea that one of these guys would cover one of his songs,” Kaftan recalls. “I thought about it and I knew that some people had covered some of pat’s songs over the years, but by his reaction, I thought that everybody would want to cover one of his songs if they knew how much it meant to him. He has built this community of songwriters at Steel Bridge songwriting festival that is a couple hundred thick of people who really admire pat, are grateful to him and the festival, and who love his songs.”

So Kaftan called up mAcdonald’s partner, melaniejane, and sound engineer Steve Hamilton (of Makin’ Sausage Music) with an idea: what if we get some Holiday Music Motel musicians together to record covers of mAcdonald’s songs and turn them into an album? Once finished, that album would be presented to an unsuspecting mAcdonald during the 2015 Steel Bridge Songfest in Sturgeon Bay.

“I was just so thrilled,” melaniejane says. “It was right around the time when I had asked pat to do a solo acoustic house concert for me as a Christmas present because I just really felt like he was neglecting his own music. He’s happiest when he’s playing.”

The trio compiled a list of 38 musicians from near and far, all of whom have participated in a songwriting event at the motel, and set them loose on claiming songs to cover. The “Secret Project” was a go and the pressure was on.

“This is the man’s creative outlet, this is what he gave to the world and we are reinterpreting it without his input and we feel a tremendous responsibility to that and to honor him and his work,” Kaftan says.

Kaftan and Hamilton assumed the roles of executive producers, with Adam Mackintosh, Jimm McIver and melaniejane serving as production assistants.

Conversations between the project’s participants were akin to the much-quoted scene in Fight Club – you do not talk about the “Secret Project.” 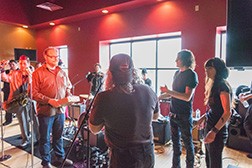 “I titled the email, ‘Secret Project,’” Kaftan explains. “And I always said the first rule of this project is if you tell anyone, if you talk about it – that it’s a secret. We can’t talk about it with pat.

But in the end, it was worth it.

Following the performance of WIFEE and the HUZzBAND (themselves a product of the Holiday Music Motel) during Steel Bridge Songfest on Saturday, June 13, Kaftan, melaniejane and Hamilton presented mAcdonald with Begging His Graces: The Songs and Sins of pat mAcdonald.

“pat didn’t know a thing right up until it was being handed to him on stage,” melaniejane says. “Nobody slipped. It was pretty incredible.”

The 38-song double album’s cover, designed by Greg Welsh (whose graphic talents have graced the covers of many Steel Bridge Songfest albums) features pat mAcdonald “as a saint,” Kaftan explains, with a halo made up of different icons paying homage to the lyrics of mAcdonald’s songs.

The content itself is a display of creativity, love and respect for one of Door County’s most cherished musicians. Kaftan points out that while many of the artists took creative liberties with mAcdonald’s songs, many stayed tried and true to his style.

For mAcdonald, who received the gift midway through the weekend’s busy festival, making time to listen to the double-album in its entirety was a priority. He wanted to make sure he gave his friends the thanks he felt they deserved before they left the Holiday Music Motel with yet another Steel Bridge Songfest behind them.

“I lost some sleep making sure that I listened to it all and I’ve listened to a bunch of it more than once,” pat says. “Just because I wanted to be able to thank everybody while they were here and tell them how much I liked their version.

“It’s like a bunch of Christmas mornings all in one,” he adds. “The songs, the way they did them, there are so many brilliant, beautiful versions of these songs. It’s one thing to record them yourself and hear yourself doing them, you’re always self critical, you get used to yourself, you get bored with yourself. But to hear other people playing your songs, it’s like, ‘Wow. These are pretty good!’ And it’s so great. My friend Joe, the work he put into putting that together and Steve Hamilton, the engineer, the work he put in and all the love that everyone put into all these different versions, it’s just overwhelming. I can’t even process it.”

He has also been able to piece together the past several months of work that have gone into creating the album while he went about his life, oblivious to the surprise that would await him during the 10th anniversary of Steel Bridge Songfest.

And as for his take on how well melaniejane kept the lid on things?

“I’m starting to realize what a good liar she can be!” pat laughs. “It scares me. No, really, the thing is she really didn’t have to do much. She made sure that it was so far under wraps that she didn’t have to lie much … she’s brilliant at keeping secrets when she knows that it’s a nice surprise.”

Even Kaftan, who guesses that he and Hamilton put more hours into the project since January than they would in any part-time job, has a hard time processing how it all came together.

He is proud nonetheless.

“I feel like my job was just to open a gate and everybody else ran through it,” Kaftan says. “And it’s because they have a love for the festival and for pat’s songs.”

Copies of Begging His Graces: The Songs and Sins of pat mAcdonald are available at the Holiday Music Motel, 30 N. 1st Ave. in Sturgeon Bay, for a $15 donation.