Ashley Wilfred Nicholson, 81, of Sturgeon Bay, died early Wednesday morning, Oct. 31, 2018 at University Hospital in Madison with family at his side. 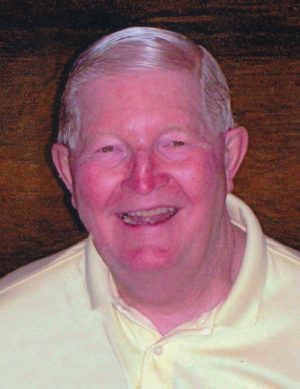 He was born Sept. 22, 1937 in Milwaukee, the son of Wilfred Nicholson and Lillian Gunderson Nicholson (Howard “Huck”) Bridenhagen. Ashley’s family moved to Door County, and he attended Sevastopol School. He served his country with the United States Army from September 1960 until his honorable discharge in March of 1961, when he was released to the United States Army Reserves. Ashley initially worked as a boilermaker around the state, wherever he was directed by the union. He went to work for Winter & Sons Inc. (plumbing and HVAC) in Appleton then established Durite Plumbing and Heating in New London, which he operated for about five years. Ashley worked for Wulf Brothers in Sturgeon Bay and then went to work for Hurckman Mechanical in Green Bay and then returned to August Winter & Sons and worked as a job estimator.

He married Janet Marie Dorchester at St. Peter’s Ev. Lutheran Church in Sturgeon Bay on September 1, 1965. They were blessed with over 43 years of marriage. Janet passed away December 16, 2008.

Ashley was a member of Hainesville Lutheran Church, south of Sturgeon Bay. He had passion for restoring old cars and riding motorcycles with Janet.

He was preceded in death by his parents; wife; and brother, Tom Nicholson.

A graveside committal service will be held at Bayside Cemetery in the summer of 2019 where Ashley will be laid to rest, beside his wife, Janet.

“A little bit of Heaven, sun, wind, and fire” was a special phrase to Ashley, and how fitting that was, as his life was certainly that.

Huehns Funeral Home, Inc. & Door County Crematory LLC are assisting the family. Expressions of sympathy, memories, and photos of Ashley may be shared with his family through his tribute page at www.huehnsfuneralhome.com.