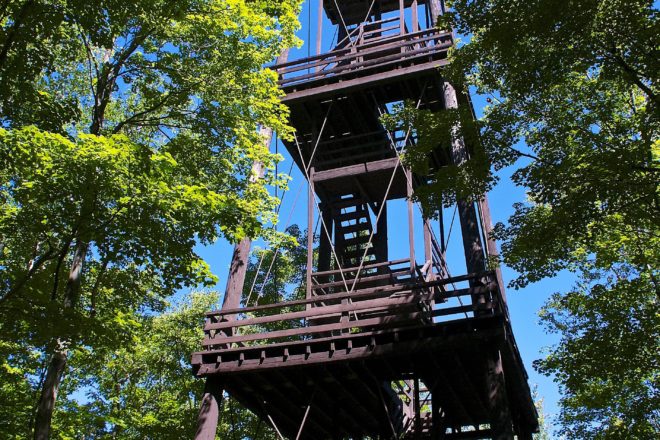 CAn assessment commissioned by the Department of Natural Resources (DNR) has concluded that the load carrying capacity of Potawatomi Tower has been compromised.

Forest Products Laboratory, part of the U.S. Forest Services, Department of Agriculture, has released its report outlining the nondestructive wood testing done on the observation tower at Potawatomi State Park.

Routine inspections of the Potawatomi tower were conducted in the spring and early winter of 2017. During these inspections park staff found visual decay and movement of the structural wood tower members. Wisconsin Department of Natural Resources engineering staff were brought in and conducted additional inspections and recommended further review.

The DNR then requested assistance from the USDA Forest Service Forest Products Laboratory in Madison, which had inspected Eagle Tower at Peninsula State Park and determined it must be removed in 2016.

Forest Product Laboratory staff conducted an inspection on the Potawatomi tower in February 2018 using non-destructive wood-testing methods to examine the wood members and the structural integrity of the tower. Their inspection found significant decay in the structural and non-structural wood members of the tower, and they recommended that the tower be closed to the public and dismantled because the wood elements should not be used any longer in a structural capacity.

According to the recently released report, many of the wood members were found to be deteriorated and it is recommended they not be reused in any load-bearing application.

In January 2019, the department issued a land use agreement to the Sturgeon Bay Historical Society to conduct similar nondestructive testing on the tower. That testing was completed in January and the report is expected to be released by the historical society in the coming weeks.

The department will use both the Forest Products Lab report as well as the report contracted by the Sturgeon Bay Historical Society to request an engineering review of the tower. The engineering firm will be charged with reviewing the reports to determine if and how the tower may possibly be repaired.