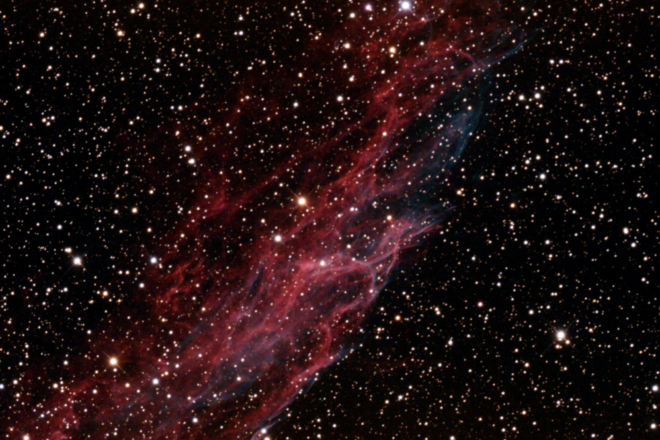 The Veil Nebula is the visible portion of a supernova remnant, the Cygnus Loop. Photo by Tom Gwilym.

Looking at the vibrant colors and laser precision of many astrophotographs, it’s hard not to see the images as art. But according to astrophotographer and Door Peninsula Astronomical Society (DPAS) member John Lyon, the process of creating them is more analogous to science.

And that process is far from easy. Astrophotography requires long exposures because the longer the exposure time, the more detail the camera sensor can capture and the less visual noise will be seen. Long exposures require slow shutter speeds, so the camera sensor is exposed for a significant amount of time.

“You’re talking about anywhere between 30 seconds to 10 minutes,” Lyon said.

With long exposures, anything that moves while the camera sensor is exposed will appear blurry in the final image. Combined with the rotation of the Earth, this makes the clear capture of astronomical objects difficult, according to DPAS vice president Tom Gwilym. The telescope itself has to be in constant motion to track the object it’s trying to take a picture of.

“If you don’t have tracking right, you get streaks,” he said. “Probably one of the biggest challenges of astrophotography is getting everything lined up and staying lined up.”

Another way to get clearer images is through stacking, or combining multiple images to reduce visual noise. In his recent picture of the Veil Nebula, for example, about six minutes’ worth of images were stacked.

“A dim object isn’t going to have full detail in one exposure, so you take another exposure, and then you stack them,” Gwilym said. “As it stacks, it fills in the gaps of [visual] noise, and it gets smoother and brighter and brings out more detail.”

Gwilym takes many of his pictures with DPAS’s new, advanced telescope: a $78,000 PlaneWave Instruments CDK400 observatory system housed in the Ray and Ruthie Stonecipher Astronomy Center in Sturgeon Bay.

Lyon has an at-home setup.

“For scopes, I use everything from a telephoto lens up through over 200 mm focal length,” he said. “I’ve got a full spectrum of telescopes to use, depending on what I’m trying to observe at that time.”

Although astrophotography can be an expensive hobby, it doesn’t have to be. Gwilym’s initial equipment was a small, $500 telescope with built-in tracking capabilities, hooked up to a webcam that he purchased on eBay.

“I cut a Fujifilm 35 mm canister; I cut the end off and glued it on there,” he said, laughing.

And with this patchworked setup, Gwilym took pictures of Jupiter and Saturn.

“Looking back at it now, they’re pretty ugly,” he said. “What we do now is so much better, but you gotta start somewhere.”

Over the years, his skills have improved alongside his equipment, but some astronomical objects still pose a challenge. Moving objects, such as the International Space Station, have been especially difficult for Gwilym.

To track a moving object while also compensating for the Earth’s rotation, he uses two-line elements, or tracking data for Earth’s satellites.

“You can find software that’ll plot it automatically, so you put that into your telescope, and it’ll track it,” Gwilym said.

For Lyon, dim objects are the most challenging ones to capture – but Door County’s dark skies make it easier.
“I have a friend in De Pere who does some beautiful work, but [light in the sky has] limited what types of images you can take from home,” Lyon said.

He pursued astrophotography because it blended his interests in space and art. (He was a photographer here on Earth, too, but he describes the two types of photography as completely different pursuits.)

When Lyon got started in astrophotography, his goal wasn’t to place his work in a gallery, but this fall, it was displayed in Algoma’s Ladybug Glass Studio & Gallery for the second year in a row.

His background is in education, so he considers his photos on display to be a form of public outreach.

“Being able to show people the different objects that are in the night sky that are capable of being photographed was my main goal,” Lyon said. “Whether people think it’s art or not really doesn’t matter.”