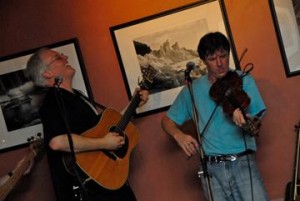 Musicians Eric Lewis (guitar, steel guitar, dobro, mandolin, bass) and Tommy Burroughs (violin, mandolin, guitar, bass) have a disarming quality that puts those around them – nervous interviewers included – at ease. Maybe it’s the accents, maybe the mix of Southern gentility and Midwestern friendliness that comes from living in Tennessee and Wisconsin. More than likely, it is that Lewis and Burroughs are themselves at ease. After rather unpredictable musical and personal journeys, these superb musicians have come full circle, finally finding their home in bluegrass music and comfort in Door County. I recently had the opportunity to sit down with Lewis and Burroughs to discuss their music and experiences. 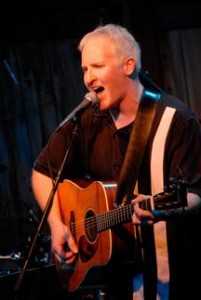 Katelin Hillbo (KH): How were you drawn to bluegrass?

Eric Lewis (EL): I don’t consider myself really a traditionalist like a lot of bluegrass players out there today. I mean, I have put out some records that I tried to be more traditional in nature with Andy Ratliff…[But] in my mid-twenties I was playing rock; you know, I was playing hard rock and heavy metal and all that other stuff that no one would ever guess by looking at me today. My mother, my grandparents and my uncle listened to and played bluegrass, and I didn’t really care for that then because I was too young and didn’t appreciate it. I wanted to play like Van Halen.

So, in my mid-twenties I was really, I don’t know, soul searching I guess, and I was introduced to a book by a guy named Stanley Booth who actually lived in Memphis at one time. He traveled with the Rolling Stones in the late ‘60s/early ‘70s and wrote a book – I don’t know when it came out – but it’s called The True Adventures of the Rolling Stones. It talked about a lot of people I knew from Memphis – and also a guy named Graham Parsons – and it talked about his country influence on the Rolling Stones. I got really into that and that led me back to Bill Monroe and things that I grew up hearing that my mother played. It was kind of like a natural transition when I started learning and wanting to get into bluegrass…It was a real natural fit – just like [he snaps] ‘wow,’ like I woke up playing it already. It just was a lot easier for me in a lot of ways, and then people seemed to like that when I performed it better than anything else.

KH: How do you think that coming to Door County from Tennessee has affected your music? Do you have any influences from Tennessee?

EL: Oh, sure! I mean, Tommy Burroughs who I play with…he’s one of the first people I ever saw play there. He’s a stellar musician in many, many ways. I feel like people in the North – or Door County anyway – tend to appreciate what we do more so than what people in our own backyard do.

EL: I mean, don’t get me wrong, people do appreciate what we do there. We do have a fan base, but it’s different. I mean, the average concert-goer or audience member in Memphis that doesn’t leave town, I think they take for granted what music is there…It’s easy to get overlooked there; and there’s a lot of competition, too, so it makes it even harder. I mean, there are some great bands up here, too…but I feel like we get treated very well here, and I appreciate it very much.

KH: What is your best story from the road or from a show?

EL: Last year, I was playing at a private party in Fond du Lac, and I met a guy with connections to the Packers. He liked my music and gave me tickets to sit in the sky box.

KH: Well, I didn’t want to ask the clichéd question ‘What is your favorite song,’ because I know, at least personally, that would be like choosing a favorite star, but what are some of the songs that have influenced you or that you’ve had a special connection with?

EL: Tough question. I mean, I know there’s plenty. There’s a U2 song that I’ve been really fond of called “Forty.” It’s on one of their older records, Sunday Bloody Sunday. It’s their concert closer number…I saw it and it just blew me away, and it’s based on Psalm 40 from the Bible. It’s really, it’s very good…I’m sure as I leave here I’ll think of about seven other things, but I’d say that U2 song, that pops into my mind right off the top of my head.

KH: What advice would you give to up-and-coming musicians?

EL: When you’re on the road, always put your keys in the same place and always make sure you have plenty of strings and plenty of nine-volt batteries – and save your money as much as possible. 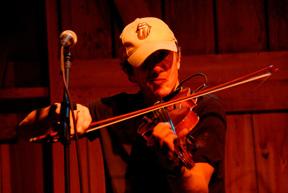 Katelin Hillbo (KH): How did you start playing?

Tommy Burroughs (TB): How did I start? Well, I come from a musical family…I was exposed to the Grand Ole Opry as a child, a young child…When I was nine years old, [my dad] showed me three chords, and I just took off from there. You couldn’t stop me; I was learning everything. I would go to places where there was a lot of playing going on. I had friends in Memphis my age that were learning, too. They’d learn something, and we’d have a little swap meet. It really wasn’t an art; it was a sport…In my case, it was like kids on X-Box now; it was like ‘oh, it’s a video game’ or something. It was playing music and seeing how fast you could play something; it was like a sport. So that’s how I kind of started.

KH: How were you drawn to bluegrass music?

TB: Just coming back to my roots. Meeting Eric [Lewis] really kind of brought me back to it…Actually, I was playing in an electric band when he came to Memphis. He was discovering a lot of acoustic and the roots of that – a lot of blues…He was really getting into the whole acoustic thing, so me coming from that, we clicked. We got together and basically that got me back. He’s responsible; Eric Lewis is responsible for me getting back to my acoustic side. It’s been a ball; it’s been a lot of fun.

KH: How long have you been doing Camp David?

TB: I think going on three years now. It all started when I was on the road with a band, and I was doing a lot of casinos – just a lot of burn out. I was in Denver, Colorado and had some differences with members of the band, and Eric Lewis [called] – just like a call from God. Eric Lewis said, ‘Look, I’ve got this thing I’m doing; I’ve been doing this for fifteen years. I’d really like you to be involved with it. I think it’s your cup of tea, and I know you well enough to know that it would be good for your soul.’ So, I think I borrowed some money from my sister to catch an airplane; I flew home and immediately got in Eric’s van, and we hauled out up here. That was three years ago, and that’s how I met Doc Heide, that’s how I met Dave Ellman, that’s how I met all the AFT (American Folklore Theatre) people. It’s just been incredible, and it’s getting bigger every year.

KH: What is your best/favorite story from the road or from a show?

TB: Oh gosh. Favorite story…well, I’ll tell you the oddest story. This is something I’ll never forget. When I was 17, almost 18 years old, I went to Europe for a couple of months. We were somewhere in Athens, Greece, playing some club over there. Actually, it was a Department of Defense Tour. They sent us over there, so we played a lot of battleships, aircraft carriers; basically, a sailor saved my life. We were on a transport boat…it was after a storm and there were 30-foot swells…We were having to wait [between swells] for the transport boat to float up next to the air craft carrier in order for the sailor…on the boat to get our gear…Well, it came time for me to get on the boat, and when I started to step off the transport boat onto the aircraft carrier, the boat dipped down. I fell, and I would’ve been crushed between two of the boats, but, a sailor grabbed me by the collar and pulled me up onto the boat… Another story right after that, we played an NCO club in Selanica, Greece, and there was a big ol’ hole in the back of the stage…[The stage] was attacked by terrorists; they blew the place up, but we still played the next night with a hole. It doesn’t get more bizarre than that.

KH: What advice would you give to up-and-coming musicians, people who are interested in doing what you do?

TB: Just be honest and true to thy self. Just do what you do, and for God’s sake, don’t let anybody else tell you that you have to play like someone else because I’ve heard that a lot and that can really screw a kid’s head up when they’re trying to really learn their instrument…Just be true to yourself and be honest with yourself, and whatever you like, my God, play it – do it, learn it, live it.