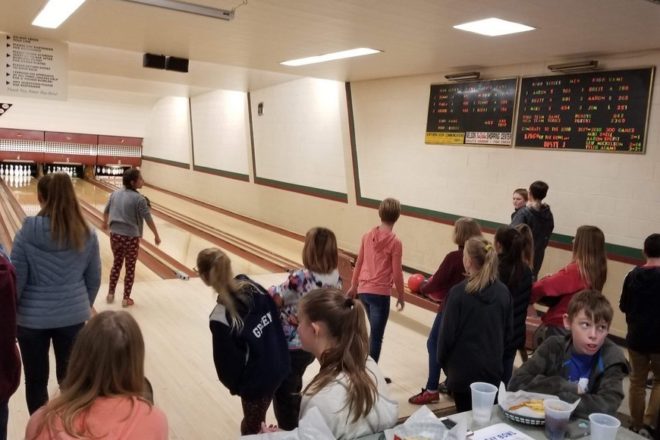 Students get taken to Sister Bay Bowl as an incentive for good attendance. Submitted.

At the end of the 2018-19 academic year, parents, teachers and school board members raised concerns when a handful of students failed to graduate on time at Gibraltar High School, in large part due to truancy.

“We are looking at our attendance situation. There are some glaring problems,” said Gibraltar School Board President Mark Weborg. “But there’s some very disturbing reasons why it’s happening. We’ve got a number of kids that are going through a lot of emotional problems.”

“What I’ve seen rise significantly is the emotional problems in kids today,” Weborg said. “Kids have a lot of stress, broken homes. They don’t know where they’re going day to day.”

Some students with chronic truancy records at the school have missed up to an estimated 60 days. The state allows students to miss up to 10 days for any reason. After 10 days, students may be excused for certain reasons such as illness, documented medical appointments, hospitalization and religious observances.

But truancy isn’t related only to mental health. Absences for extracurriculars and family vacations also come into play at Gibraltar.

“In our school, we have significant numbers of outliers,” said Stephen Seyfer, who was superintendent at Gibraltar before retiring and joining the school board. “And you also have to look at how many absences are school-approved. If you’re out for three sports at Gibraltar, you’re going to go well beyond the state number of absences.”

That’s due to Gibraltar’s isolated location, which requires significant travel time to compete against far-flung opponents or take part in academic extracurriculars. That results in students often being excused from multiple afternoon classes.

“At Gibraltar, we’re also 20 or more miles away from many hospitals, dentists and mental-health providers, so a simple appointment turns into a half-day absence,” Seyfer said. “So between excused absences and school-approved absences, you have to ask how many class periods of learning are missed.”

Absenteeism at Gibraltar affects the operations of the school for teachers and students who work hard to be in class every day. One occurence that Seyfer said is more common at Gibraltar is the number of parents who take families on extended vacations.

“When a parent takes a student out of class for an extended spring break or long weekends, teachers are expected to prepare their homework for them,” Seyfer said. “When students skip, teachers have to reteach those lessons to them. That adds up to a lot of time.”

Gibraltar has committed to offering a wide variety of advanced-placement (AP) classes to prepare students for college, but Seyfer and teachers say that almost every AP course requires more instructional hours than the school calendar allows. When high rates of absenteeism are added to that mix, teachers scramble to catch students up.

When the school board’s policy committee formed this summer, it identified attendance as its number-one priority, Seyfer said. But Gibraltar isn’t the only school dealing with attendance issues.

According to the U.S. Department of Education, chronic absenteeism is a “hidden educational crisis” in the nation.

The 2015-16 Civil Rights Data Collection, a biennial survey of education and civil-rights issues in U.S. public schools, revealed that more than 7 million students missed 15 or more days during the school year: what the U.S. Department of Education considers chronic absenteeism.

Tim Mulrain, assistant principal and dean of students at Gibraltar, said the reasons students are chronically absent are changing.

“I don’t see a huge number of kids not coming to school because they don’t want to,” he said. “What I do see is that our rates of students with severe and debilitating mental health issues, those rates are going up.”

Gibraltar, along with other Door County schools, is addressing the issue with programs such as STRIDE, which places a mental-health professional in each school. This is helpful especially in Northern Door, where providers aren’t as readily accessible.

Gibraltar is also working to understand the underlying issues behind truancy rather than giving students fines through the court system, Mulrain said, which hasn’t historically worked for them. It’s caused families to leave the school and pursue homeschooling instead.

“I don’t think that a parent should make the choice to homeschool their child because they can’t get their child to come to school,” he said.

According to the Wisconsin Department of Public Instruction, students who are habitually truant are referred to either juvenile or municipal court, each with its own set of consequences.

In municipal court, some include suspending a student’s driver’s license, community service, home detention and up to $500 in fines plus court fees. Juvenile court consequences include counseling the student or guardians, formal supervision, electronic monitoring and drug testing.

Parents can be found guilty of a misdemeanor when their children are truant and can be fined up to $500 or imprisoned for 30 days for their first offense. After the first offense, those numbers go up to $1,000 and 90 days. They can perform community service instead of these penalties, but they are still responsible for the fees their child incurs.

Mulrain has spearheaded a team of elementary and secondary teachers to collect and review behavior data on a regular basis so they can make changes when necessary. The team uses PBIS (positive behavioral interventions and supports), which is more of a behavioral psychology approach than a punitive one, he said.

Attendance has been one of the team’s focus points during the past three years, and team members have come up with solutions such as positive reinforcement for good attendance. For example, students with good attendance go out to eat at Sister Bay Bowl once a quarter.

To combat missed class time, Gibraltar is working on creating individual learning plans online so that kids can complete work outside of the classroom. This is also available to students whose parents take them on extended vacations during the year – a common trend in tourist areas, Mulrain said. Modified school days are also options.

“It’s our responsibility as the school to continually engage [students] in learning, no matter where you are academically,” Mulrain said. “We can do that using different tools and different formats when we never could before.”

This is accessible to the students at Gibraltar, who are all provided with laptops that they can take home with them. The online format is especially helpful to students with mental-health conditions who may, for example, Skype into class.

During the summer, the school board’s policy committee worked on updating the attendance and truancy policies for the 2019-20 school year to match the needs of the district and community, Mulrain said.

“It’s allowing us to build those things in, and build individual learning plans for students rather than a one-size-fits-all approach,” he said.

Though Gibraltar’s chronic absenteeism rate is high, data provided by Superintendent Tina Van Meer shows that the percentage of K-12 students with 10 or more absences has improved since 2010-11. In 2014-15, that percentage was at a peak of 50 percent, but it fell to about 25 percent in 2018-19.

On the legal side of things, the school is adamant about following state truancy laws. But it also works with parents who are open and communicative about what’s going on, especially for situations such as documented medical issues. But it can get fuzzy, she said.

“Students with anxiety and/or depression will miss a lot of school,” O’Handley said. “And they don’t always see that as a medical issue, or they don’t get medical documentation of that, or they’re untreated altogether.”

Strategies to keep students in school include allowing them to work virtually, and in extreme cases when all other strategies have been exhausted, some don’t even go to the building.

Structuring the day differently can also help. If a student has trouble with mornings, he or she could attend at a later time. Schools also develop accommodation plans, such as a list of strategies for addressing anxiety at school and at home.