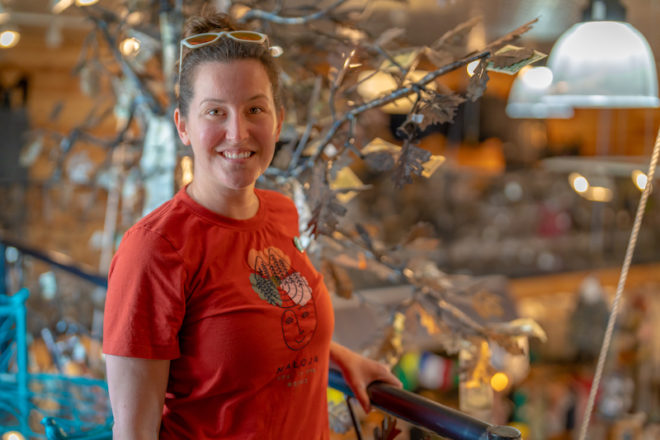 As with trees, sometimes the biggest dreams can grow from the smallest seed. For Shannon Mough, her daily yoga and meditation practice planted the seed for a new home and a new career.

“I was living in Chicago, doing meditation and yoga, and somewhere along the way, I thought, ‘Maybe I’ll open a yoga studio in Door County,’” she recalled.

At the time, Mough didn’t know where in Door County exactly, but her husband, Mike Tomasian, who had been visiting Door County for longer than she had, remembered when the old pharmacy was the cornerstone of the Country Walk Shops in Sister Bay.

“We looked at this building, which had been vacant and needed so much work,” she said.

But more than the necessary repairs, Mough noticed the surrounding stores.

“I saw all these other stores here where people were really trying. This store, at one point, was those other stores’ anchor,” she said.

In that moment, Mough remembers feeling nudged to roll the dice and turn the vacant space into that anchor store once again. But then when a yoga studio opened across the street, she began to shift her focus.

“My happy place is anywhere in nature or in the woods,” she said. “I spend a lot of time outside.”

Even before the couple purchased 20 acres in Liberty Grove, the outdoors was a big part of Mough’s life. She spent the majority of her free time outdoors, seeking out local parks and forest preserves when she lived in Chicago and, before moving here, escaping to Door County whenever she had a free weekend.

So when the idea of a Door County-based athleisure apparel and retail store began to work its way into Mough’s thoughts and business aspirations, it was no surprise that trees would inspire not only the aesthetics of her new business, but its mission as well.

“I really wanted to call it Twisted Tree. I felt really strongly about it,” she said, explaining that the inspiration came from Ram Dass’ poem “Trees.”

“The poem basically says that when you go out into the woods, you’ll see all these different trees of various shapes and sizes. Some are bent; some are twisted, but when you look at a tree, you don’t judge it. It’s a tree,” Mough said.

Her mission with Twisted Tree is to “turn people into trees,” she said, “meaning, I appreciate them for just the way they are.”

One way Mough strives to do that is by trying to make every shopping experience a positive one. The store carries a variety of styles and sizes for all body types (up to a 3X and sometimes a 4X if the brand offers it), as well as a masculine apparel line. She also makes it a priority to coach her staff members to be guides who help customers to become not only their best-dressed — but also their best-feeling — self, versus trying to make a sale.

“When I decided to open this place, I wanted it to be a positive shopping experience for everyone, regardless of body type,” Mough said. “So often I’ll hear some women say, ‘I’m too curvy. I can only shop for shoes and jewelry.’ What fun is that? I wanted something different for people.”

And different it is.

Stepping into Twisted Tree evokes all the feelings of stepping into nature. From the moment customers walk through the doors, the calming presence of nature is inescapable, thanks to the store’s creative, purposeful design, which blends warm wood accents into large, airy spaces washed in natural light.

“[Mike] had the vision for this place, of bringing the outdoors in,” Mough said. “He told me exactly how everything would look. With the terrible condition the building was in, I’m not sure how he even saw the potential in it.”

Relying on his years of experience doing commercial build-outs, he knew exactly how he wanted to design the store’s layout and traffic flow. The metal railings along the upper loft — designed by Cutting Edge Metals in Superior, Wisconsin, and based on inspiration photos the couple submitted — were also part of his vision. The result was a work of art: twisted, leaf-covered vines that meet at a large metal tree at the front of the store. It’s the shop’s Giving Tree, which is a collection point for charitable donations for community organizations.

Across from the Giving Tree, on the opposite wall, a mural of Ram Dass’ poem is a nod to the store’s name, and in each dressing room, the mirrors display quotes and sayings that promote positive self-image and body image.

“I feel like people, especially women and people who identify as women, look in the mirror and immediately begin picking themselves apart,” Mough said, pointing out her favorite dressing-room quote: “The size of my waist has nothing to do with my worth.”

“Even if these messages resonate with just one person, I feel like I’ve made a positive difference with my work,” she said.

Mough admits that retail was never her first choice — nor did it come naturally. Instead, she learned on the job, relying on friends who did have retail experience to help guide her in merchandising and creating displays.

“There were definitely times I was up late at night, crying, trying to put together a display and wondering, ‘Why did I do this?’” she recalled.

But she didn’t hide those feelings, instead documenting Twisted Tree’s infancy on Instagram long before the doors opened. It was that sense of vulnerability and honesty while building this dream that first caught Claudia Scimeca’s eye while browsing on Instagram one day.

“From the beginning, even before the store opened, she was getting people excited about this vision she had for the business,” said Scimeca, who worked in the social-media industry at the time and eventually became Twisted Tree’s social-media manager. “She made it feel like an adventure and like we, as the audience, were a part of the growth. Like you’ve been there with her through the dirt and the grime and the process.”

But more than Mough’s innate knack for branding and using social media to build a brand community, Scimeca said Mough’s genuine care for what she’s building and for whom she’s building it help Twisted Tree to stand out in a forest of retailers.

The dream for Twisted Tree was never about creating another retail store. It was about creating connections — with customers, the community and the mission of the brands she carries.

“Brand is important to me — the story of the brand, what they’re doing to give back to the community, how they are respecting the environment,” Mough said. “All of that is really important to me.”

And although it requires a little extra homework, she also makes it a point to not select brands that other area retailers carry and to include her four-legged customers with an entire section dedicated to pets.

Five years in, Mough continues to marvel at the twists and turns her journey has taken and how, in the process, they have shaped both her business and her life.

“When I think about the benefits of being here, doing what I am doing, verus the hardships, there is not much to complain about,” she said. “I’m incredibly privileged to be here, to have this space and to be doing what I’m doing. It’s been a wild ride, but it’s been great.”