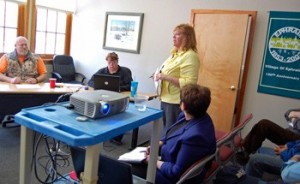 Now, Ephraim, Wis., joins the long list of communities that have had public debate about the erection of cell phone towers.

Village President Mike McCutcheon convened a special meeting of the Ephraim Board of Trustees the afternoon of April 23 by saying, “This is a process of discovery,” and he predicted that it would be a “long process.”

The meeting was held to hear a presentation from two AT&T representatives about erecting a temporary Cell on Wheels (COW) on municipal property by the village office and fire station.

How tall? She said the tallest tree in the area measured 67 feet, so the COW would be 75 feet. The goal, she said, is for the tower to look down on the city just above the tree line.

She said the least attractive part of a COW is its base, which consists of concrete supports that serve as ballast to anchor the tower. AT&T would put a fence around the base.

As well as providing cell service to long frustrated AT&T users visiting Ephraim through the season, Tonkovitz said the temporary installation would allow AT&T to collect data that would enable them to perfectly position a permanent tower.

“We already know we have a lot of complaints on coverage,” Tonkovitz said, a claim that was backed up anecdotally by several members of the public who spoke during a comment section of the meeting, and by a survey of the Ephraim business community conducted by Jason Szmanda, the Ephraim Business Council’s tourism administrator.

The survey, with 37 respondents (remember, this is a village of 288 fulltime residents), found almost 80 percent had connectivity issues in Ephraim. Another 70 percent said that limited connectivity reflects negatively on Ephraim, and about the same percent said their business has been negatively affected by the situation. His final question was to ask the business owners “specific carriers about which customers have complained.”

Both Tonkovitz and AT&T contract employee Barbara Stout Newman, project manager with Ramaker & Associates of Sauk City, Wis., said they and AT&T understand the unique aesthetic of Ephraim, so AT&T would be willing to make the $1 million investment to create a stealth tower that would blend into the environment.

Tonkovitz rattled off a list of possible stealth towers – elm tree, palm tree, church steeple, bell tower, silo – and suggested people Google stealth tower to get a better idea of what can be done.

“Almost anything that’s out there, we can do,” she said, and throughout the meeting both she and Newman emphasized that AT&T wants to work with the community.

However, they pointed out, if AT&T is rejected by a municipality a private landowner can make a deal with them.

Is that a likely scenario?

Village President McCutcheon asked Tonkovitz if the village allowed the temporary tower but then decided not to go ahead with a permanent tower, “Would you just go away?”

“I don’t see us going away,” Tonkovitz said.

Trustee Steve Sauter has read the state legislation revised in 2013 regarding private landowners and cell towers and thanked the two AT&T ladies for playing nice because, he said, “You don’t have to be nice any more.”

Here are some of the 23 “limitations” imposed on “political subdivisions” in the 2013 rewrite of the cell phone tower citing regulations, meaning these are things a municipality cannot do:

• Disapprove an application … based solely on aesthetic concerns.

• Impose a setback or fall zone requirement for a mobile service support structure that is different from a requirement that is imposed on other types of commercial structures.

• Disapprove an application based solely on the height of the mobile service support structure or on whether the structure requires lighting.

• Limit the duration of any permit that is granted.

Resident Paul Burton was the first to speak during the public comment period. He suggested a couple of locations for a permanent tower, including the Moravian Church Steeple. He provided the women with a document detailing a stealth deal the church had already made.

He also said there is “no question” that cell towers diminish property values, to which Tonkovitz responded that studies have been done that show towers have not diminished property values.

Resident Kathy Kirkland said she lives near where the proposed temporary tower would go, and though she might eventually get used to it, someone who came to buy her property would immediately notice it, so it would affect property values

Kirkland and several others seemed set against a tower, stealth or otherwise, while the Ephraim business owners in attendance had stories of complaints from customers about lack of service from AT&T – the country’s second largest provider.

Szmanda of the Ephraim Business Council quoted Sam Perlman of the Door County Economic Development Corp., who attended an earlier meeting on the cell phone tower and said that service is “essential infrastructure” in today’s world. Szmanda added that if Ephraim intends to be a welcoming community for tourists, it should accommodate visitors who are AT&T customers and expect to be able to use their devices in Ephraim.

Trustee Sauter said the best path is to participate with providers as partners “so we can influence the process.”

Tonkovitz asked what has to happen next to get the COW in place, to which McCutcheon said “We want to continue dialogue with our citizens.”