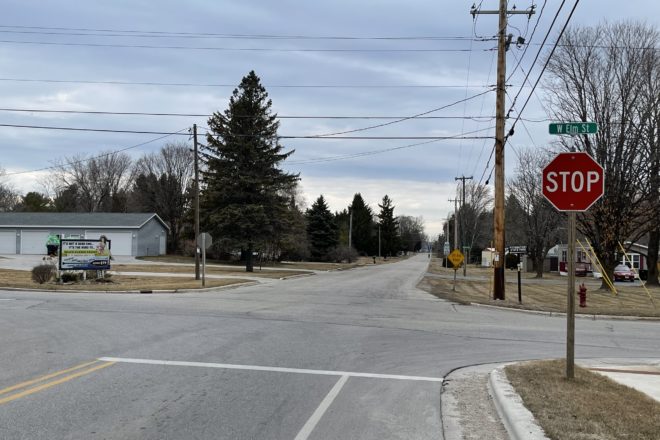 This is the intersection of County C and North Duluth Avenue, which dead-ends at the back end of Potawatomi State Park. The Town of Nasewaupee and a City of Sturgeon Bay committee want the city, town and county to open the road to ATV/UTV use. The majority of the residents who have commented on the issue are opposed to the move. Photo by D.A. Fitzgerald.

The first action came Monday from the Sturgeon Bay Parking and Traffic Committee, which postponed action on opening the road to ATV/UTV use until its next meeting April 26.

The second action came Tuesday from the Door County Board of Supervisors, which decided that requests from both the Town of Nasewaupee and the City of Sturgeon Bay to approve ATV/UTV use on County C from County PD north to North Duluth Avenue had been made inappropriately.

“It was individuals acting trying to get support from the county to endorse their request,” said County Board Supervisor Dave Englebert, who also sits on the county’s Highway and Airport Committee.

Those individuals were Nasewaupee Town Board Chair Steve Sullivan and Sturgeon Bay Alders Kirsten Reeths and Gary Nault. Sullivan had sent a letter to the county dated Jan. 21 asking for the county to allow the use on County C so that Sturgeon Bay could be connected to the rest of Southern Door’s ATV trails. However, the town didn’t actually approve opening the town’s portion of the route until Feb. 18.

Similarly, Reeths and Nault, who serve as chair and vice chair, respectively, of the city’s Parking and Traffic Committee, also sent a letter to the county Jan. 22 asking for the county to open County C. But its committee wouldn’t approve opening North Duluth Avenue to ATV use until Jan. 26, and the City of Sturgeon Bay – which has the final say – never approved the opening.

The county board sent the issue back to the Highway and Airport Committee with a recommendation that the route be rescinded from the county’s ATV/UTV ordinance.

“I’d really like the Highway Committee to take another look at this,” Englebert said. “Perhaps the Sheriff’s Department wasn’t really in favor of that use. There seems to be a lot of questions. There’s a process that should be followed, and I don’t know that [it] was followed in this case.”

Several commissioners echoed Englebert’s comments, even if they otherwise supported ATV use on County C.

“There’s obviously a lot of people that aren’t on the same page here,” said Supervisor Joel Gunnlaugsson. “I’m in support of ATVs for this, but it hasn’t followed the process it needs to to get my support.”

Although the county sent the route back to committee on a technicality, the day before, the city dealt with a packed house of socially distanced residents who primarily voiced opposition to ATV/UTV use on North Duluth Avenue.

About 30 people attended that Parking and Traffic Committee meeting – no virtual options were offered – and half of them spoke. Three people were in favor of opening the road for ATV use; the rest were not.

Safety concerns and noise issues were the primary concerns among those who didn’t want the four-wheelers on the narrow, twisting, hilly road that dead-ends at the back entrance to Potawatomi State Park.

Those who said they favored the use on the road wanted access in the winter for ice anglers, and they didn’t think the noise or traffic would be issues.

After the residents spoke, Nault motioned to continue to look into ATV routes within the city, including North Duluth Avenue, but his motion died for lack of a second. Reeths then motioned to postpone the discussion until April 26, which the three-member committee – made up of Reeths, Nault and Alder Spencer Gustafson – passed unanimously.