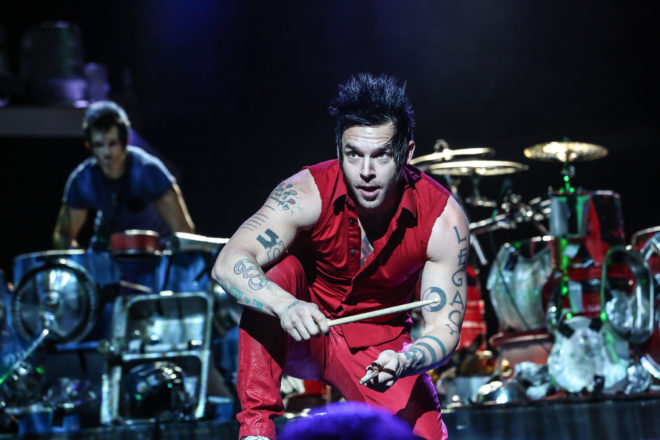 Recycled Percussion will perform at DCA on Jan. 23. Submitted.

It’s not every day that residents of Door County are treated to a Vegas-style performance. But that’s just what we’ll get when Justin Spencer and his band, Recycled Percussion (consisting of Spencer, Ryan Vezina, Matt Bowman and Jason Davies) perform at the Door Community Auditorium on Jan. 23. If you have the pleasure of attending the event, you’ll see a band that is more than 20 years in the making. And it all started as a talent show act.

In 1995, Justin Spencer formed the first iteration of the band as an act for a talent show in their native New Hampshire. The band used different objects such as buckets and trash cans and turned them into percussion instruments for their performances. This “junk rock” method is more familiar to us today, with the rise of performers such as Blue Man Group and Stomp, but it was unheard of at the time. Spencer got the idea to repurpose these various objects as percussion instruments by watching the street performers in NYC subways. And with that, Recycled Percussion was born.

Spencer would keep the band together, through college, awaiting their big break as they played around the New England area. Then, in 2001, that big break came when Recycled Percussion was asked to do the halftime show for a San Francisco 49ers football game. Spencer said about the experience, “that opened the eyes of a lot of people all over the country. That pushed us into the touring route, where we could start getting tour buses, start performing in theaters and colleges.” But it wasn’t until 2009 that Spencer’s band reached the heights that it sits at today.

Though the band certainly began to get noticed more in the wake of the show’s airing, Spencer admits their appearance on the show probably missed what would have been inevitable internet fame a few years later.

It was during this stretch that Spencer says Recycled Percussion really came into its own. With an act of Recycled Percussion’s nature (that is so impressive on its first view), the band needed to figure out how it would continue to wow the judges.

“Unlike a singer, where they just have to do a new song, we had to write new concepts, because we’re performance art. So it was a little bit more challenging for us,” Spencer said.

Over the course of this period, Recycled Percussion was able to put together a full set list and gain the confidence that they were ready for something more.

“It showed us what our capabilities were. It showed us what we could do if we had a residency,” Spencer said. It should come as no surprise, then, that Vegas was the group’s next step. For the last eight years, since their AGT appearance, Recycled Percussion has held a coveted residency in Las Vegas.

After years of success performing 11 months of the year there, Spencer and the band have decided to return briefly to touring the country. Starting in New York, Recycled Percussion is making stops throughout the continental United States, and ending in Vegas to resume their residency. Door County is one of only a handful of places where Recycled Percussion will perform during this tour.

Spencer has also recently launched a television show with the band called “Chaos and Kindness,” which is wrapping up its first season. Spencer describes the show as a combination of “Jackass” and Make-A-Wish.

“We do crazy stuff to inspire people, and help individuals that are going through tough times,” Spencer said.

An example of an episode is Spencer and his band performing improvised acts of kindness for 20 minutes straight with one take from one camera. Spencer said of his inspiration for the show, “We’re really honored to have the life that we have, and to not share that and inspire people I just feel would be a big letdown.”

Though the band is known for its creative percussion, Spencer emphasized that the show has evolved to become a multifaceted performance.

Recycled Percussion performs Tuesday, Jan. 23 at 7pm at the Door Community Auditorium. For more information or to reserve tickets, call 920.868.2728 or visit dcauditorium.org.