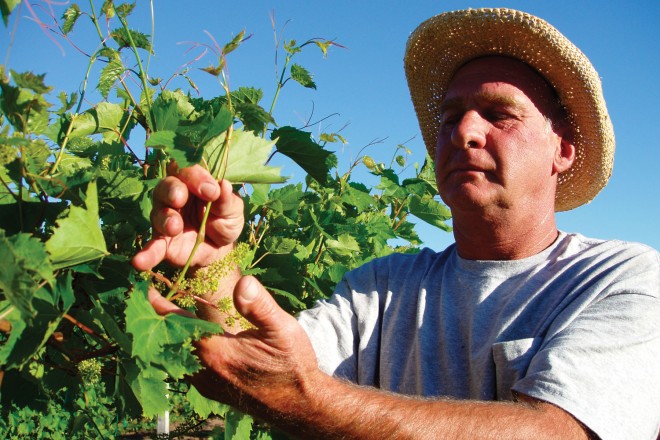 After five years of labor, Orchard Country Winery & Market is prepared to introduce the newest addition to their family – of wines. Long recognized for growing quality fruits and creating memorable fruit wines, the Lautenbach family has spread its branches into an exciting new territory – producing Door County’s first dry red wine made from locally-grown grapes. To commemorate the birth of another first (owner Bob Lautenbach’s first grandchild), the new wine has been dubbed Audrey Grace, after the baby girl born to daughter Carrie and husband Jody Viste in August 2003.

Bob Lautenbach had already gained 40 years of experience with growing fruit when he decided to experiment with grapes four years ago. “This was my parent’s farm –what is now the winery used to be the dairy barn. It’s about ninety years old. When I was a kid, we had fruit trees, but it was primarily a dairy operation — so I know something about milking cows, too.” Bob explains, “We started the farm market in the 1970s, and opened the winery in the 1980s. Now, all of the trees that are growing in this orchard were actually planted by my generation.”

Around 8,000 fruit trees currently thrive in the family orchards. The apples, sweet and tart cherries, pears, plums, and raspberries — despite their numbers — seem much less complicated to Lautenbach these days. “Grapes are much harder to grow than cherries or apples, or any other fruit I’ve ever grown!” he says, and touring the vineyard, he demonstrates why this is so. “Anyone who uses the expression, ‘It grows like grapes,’ well . .. they aren’t kidding!”

The two-acre vineyard requires a lot of maintenance. As the grapes grow, there is regular tending to train the vines to keep them off the ground, and as the fruit clusters become heavier, the wires supporting the vines must be tightened. Each vine needs careful pruning at least three times during the season to allow the proper amount of sunlight to reach the grapes. The number of clusters allowed to mature on a two-foot-length of vine also must be checked, as this will, in part, determine the sweetness of the fruit. To produce a wine with an 11 % alcohol content, the fruit must have a 22% sweetness level.

Lautenbach chose to grow French hybrid Foch and Frontenac grapes. Their hardy nature was the most important factor in making the decision. The grape season in Door County begins in mid-May, and ends with the first frost around October 1. The Foch and Frontenac varieties have sufficient growing days to reach the required sweetness level, and do not die off over the winter. “The first two years, we didn’t get any grapes, of course … but the third year, we were able to harvest, and pressed 75 gallons of juice. Last fall, we pressed another 75,” Lautenbach says.

After the first pressing, Lautenbach and winemaker Jim Bowers moved into the testing phase to find the right balance of the two juices to produce the new wine. A year-and- a-half later Audrey Grace — the wine — was born. Just after that first pressing in fall of 2003, he was taking a walk in the vineyard with daughter Carrie and granddaughter Audrey Grace, and knew immediately what the new wine should be called.