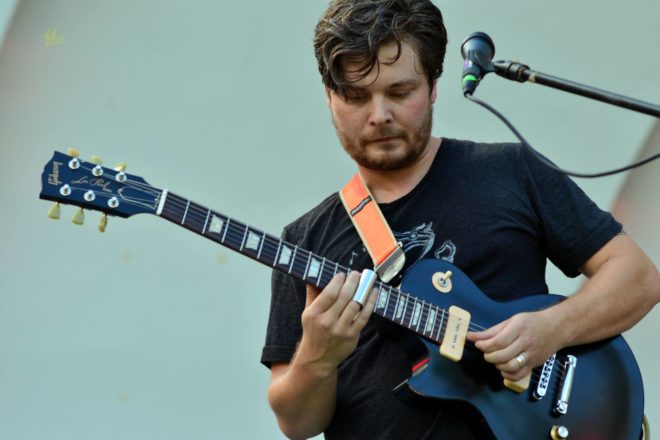 Paul Taylor is a second-generation multi-instrumentalist and singer-songwriter from Memphis who now lives in Door County. His new release, It Is What It Isn’t – released under the alias New Memphis Colorways – comes out this month.

Type of music: “Duke Ellington postulated that there are only two types of music: good music and bad music. Always striving for the former! Stylistically speaking, pretty much boundary free.”

Door County connection: “I started coming up to play the Fishstock series Labor Day concerts with Eric Lewis in 2007 and have been continuing to do so for more years than not ever since. My wife and I fell in love with Door County and even eloped to be married here in 2013. We’ve always dreamt of making this peninsula our home. In a way, the pandemic freed us up from all of our previous Memphis obligations, so we decided to follow that dream, and we’ve been here since November 2020 – so far, so good!”

Last Door County performance: “I just filmed a concert to be aired for the DCA Coffeehouse Series on May 20, but before that, the Fishstock Labor Day concert in 2019.”

Vanessa McGowan (VM): Who or what first got you into music?

Paul Taylor (PT): My dad and my stepfather were both locally renowned musicians and singer-songwriters in Memphis, and my aunt was a house writer at Stax, so pretty much from day one I was surrounded by instruments and recording gear. I got started before I could walk or talk, probably. Environmental conditioning.

(VM): How would you describe the music that you typically create?

(PT): Perhaps to a fault, I’m a bit all over the place. I’ve been very fortunate to get to play many different kinds of music with a wide range of artists on a regular basis.

As an example of the way my life has gone, I could be playing bass with Ann Peebles or Eric Gales one minute, drums with Chuck Prophet or Robert Ellis the next, guitar with Reba Russell or Van Duren the next – and that diversity has informed the music I personally create. I don’t really prefer one genre over the other. “Songy” stuff, jazz, blues, funk, rock ’n’ roll, country, folk and beyond – I love playing it all!

To that point, the day after my DCA concert airs on May 20, which is a mellow acoustic set featuring some of my more heartfelt songs, my experimental funk jazz instrumental record comes out on May 21.

(VM): If you could collaborate with any artist, who would it be?

(PT): I made a record last year (which will come out next year) with my lifelong friends and musical associates Luther Dickinson (North Mississippi Allstars, Black Crowes) and Steve Selvidge (Hold Steady, Bash and Pop). It’s a crowning achievement of our 30-plus-year friendship. Hard to imagine topping that – that is, unless I could make a record with Tom Jenkinson.

(VM): When you’re not making music, what else do you enjoy doing?

(PT): I’m an avid nature lover, so I think we came to the right place! The park systems and land trusts up here are unbelievably beautiful, and I spend as much time as I can getting to know them.

(VM): What aspect have you missed the most with the lack of gigs during the pandemic?

(PT): The human connection, of course. I went from playing over 200 gigs per year for the last few decades to zilch over the last year, and it’s made me realize how incredibly blessed we all are to get to make the sacred transaction of offering up our music for an audience’s appreciation, live on the spot. When things get back to normal, I know that I will be appreciating the audiences more than ever.

(VM): What exciting projects do you have on the horizon?

(PT): Did I mention that my new record, under my alias New Memphis Colorways, called It Is What It Isn’t, drops May 21? If you like jazz or funk, please check it out. It’ll be streaming on all of the streaming outlets.

Having been here since November of 2020, the new environs of Door County have already inspired me to record music that sounds unlike anything else I’ve done previously.

I’m also hoping to meet musicians around here to play with – and I’d love to find some folks to form a trio with! – but in the meantime, hopefully you can catch me out there on some summer stages doing my solo acoustic act.