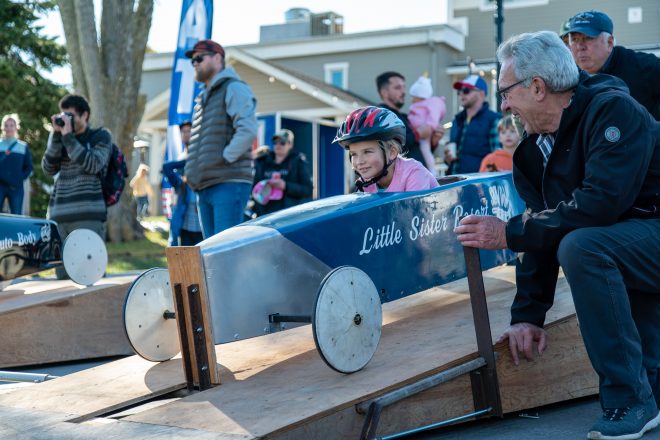 The morning air was still crisp when the first young racer, Hudson Bridenhagen, took a seat in his derby car for the pre-race weigh-in during the revival of the Fall Fest Derby Race.

It had been nearly 20 years since the festival’s last derby race – a pause brought on by a couple of injured drivers. But this year, the old derby cars returned to the big hill – pulled from storage sheds or barns and given new life – with new drivers between the ages of 7 and 13, and starting ramps that were a little more modest than in the past.

As each car was weighed and brought as close to the 200-pound limit as possible, the question for each driver was the same: “What’s your strategy?” Each answer was a resounding, “Go fast. Go straight.”

Except from one racer: Avery Burress, the only girl among the seven competitors. Clad in her lucky sloth T-shirt, she had a different approach.

That same motto was emblazoned on her blue-and-silver Little Sister Resort derby car. Perhaps she was being facetious, because as she won heat after heat, it became clear that her car was anything but slow. When all was said and done, Burress emerged as the champion.

After Fuzzy Sunstrom – the person behind the race – handed out trophies to the top three racers, Burress was asked whether there was anything she wanted to let the folks watching know.

“Even though sloths are slow, they are powerful!” she said.