I can’t think of a single nature experience that we eagerly wait for more each early to mid-October, which suddenly and joyously turns our faces skyward, than a flock of migrating Sandhill Cranes. Seeing a flock of Sandhill Cranes migrating southward on a crisp autumn day, flying 10,000 or more feet above the earth’s surface, so high one can barely hear their bugling calls, is unforgettable.

Added to the pure joy of being close to them, often through pure luck, occurs when we suddenly approach a pair or several of the stately birds probing a soggy wet field near the road for their food. Apparently they have become conditioned to the cars and usually don’t even lift their heads upward, as long as we proceed slowly and remain in the car.

Sandhill Cranes and Canada Geese search for food in a cut-over corn field as they prepare for their migration south. Photo by Len Villano.

Another spine-tingling thrill comes when the cranes let loose with their calls. In the case that you’ve not heard Sandhill Cranes, I hope you will someday experience the thrill of their wild, far-reaching voices. Due to a windpipe that is about five feet long, with nearly half of it looped within the keel of the breastbone, somewhat like a French horn, its calls are clear, shrill, and trumpet-like in quality: “ga-ROOO-a-a-a-a.”

Marshes, bogs, open edges of swamps and even flooded lowland fields are now sought after by these Great Sandhill Cranes arriving from their nesting sites to the north. Waste grain and corn remaining on the ground, along with plenty of standing corn, will constitute the bulk of their food now. Other food searched for includes roots, tubers, seeds, berries, mice, snakes, frogs, crayfish, earthworms, crickets, grasshoppers and beetles.

If you do see a small group of these cranes, look carefully for juveniles in with the slate-gray adults having the bare reddish patch on the forehead and upper face. Young birds will be more brownish. Their heads will be tawny and they will lack the red forehead patch. In fact these youngsters will not acquire full adult plumage until they are about 2½ years old.

One of the most likely and easily made mistakes the casual observer of birds in this area will make is to call a Great Blue Heron a Sandhill Crane. Outstretched, both are about the same size and both are known for their long legs, necks and bills. One of the most easily seen differences comes when the heron is in flight. Its neck is slightly folded over its back in an S-shape. All cranes fly with outstretched necks. 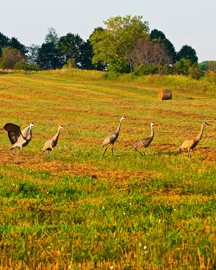 A Sandhill Crane is also more uniformly gray than is the large heron. Also quite different are their wing beats. The crane has a considerably quicker wing upstroke than the more lumbering, even-paced flight of the Great Blue Heron. Another excellent field mark of the Sandhill is its “bustle” or distended fullness of its rear feathers when it is walking on the ground searching for food. Herons lack this feature. Then too the loud shrill song of the Sandhill Crane is a positive and reliable mark of identification. To me, it’s the true “call of the wild!”

What a huge boost all the crane species of the world, including Sandhills, received when the International Crane Foundation was founded in 1973 near Baraboo, Wis. Visit this incredible facility and you won’t be sorry. Charlotte and I have been fortunate to know Jim Rogers and his wife from Columbia, Missouri. They spend part of each summer in Baileys Harbor, and Jim is very active helping the Crane Foundation He has shared with us many of his exciting experiences in China, Nepal and Bhutan, where he has helped educate people there to understand their native cranes better and to give the birds much more important protection.

I’m sure it was Jim’s incredible crane stories that prompted us to travel to the Platte River in March 19 years ago, in the vicinity of Kearney, Nebraska, and to obtain permits to use one of the wonderful observation blinds at the Audubon’s Rowe Sanctuary. This was to be a once-in-a-lifetime experience with the cranes when we made reservations to use the blind in the evening of the first day we arrived and also the very next early morning well before sunrise. Later we both heartily agreed that the $25 per person fee was easily worth the price, and then some. The photographic opportunities are superb.

The area is so attractive to the hundreds of thousands of cranes and other waterfowl, especially the White-fronted Goose, that you can have awesome crane and waterfowl experiences without using a blind. By the way, your car makes an excellent blind as long as you remain inside. Photographing from opened windows works well and does not scare the birds. We found that business people, for example, in the vicinity of Kearney, did their utmost to cater to the wildlife viewers in a remarkable, polite and efficient fashion. Maps and directions were shared and eating establishments were outstanding, as were the sleeping facilities. 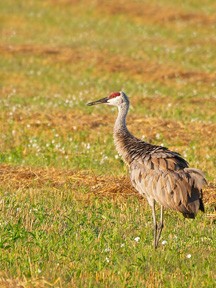 The Sandhill Cranes you will see along the Platte River are the Lesser Sandhill Cranes that congregate there by the hundreds of thousands during their migrations. Those we see here in Wisconsin, farther to the east, are the Greater Sandhills. Frankly I cannot see much difference between the two. The Lessers winter primarily along the Gulf Coast and the southwest and nest in the far northern reaches of northwest Canada and Alaska. The Greaters winter primarily in Florida, then migrate each spring north to Minnesota, Wisconsin, Michigan and into southern Ontario, Canada to nest. Nearly all of the Greaters stop each fall during their southerly migration at the famous Jasper-Pulaski State Wildlife Area in northern Indiana to rest and feed for several weeks before heading to Florida.

Even based on our one-time experience at the Jasper-Pulaski area, we very highly recommend an experience there. We found that an overnight stay giving you more viewing time was extremely helpful.

Every fall Charlotte and I marvel at the appearance of what we feel may be a slowly increasing number of Sandhills in Door County. Unfortunately here is a county where development is proceeding much faster than we wish it were and the cranes are being “squeezed.” Deep down our feelings are that these cranes are trumpeting a clarion message, “Save, protect, preserve! Please help us!”