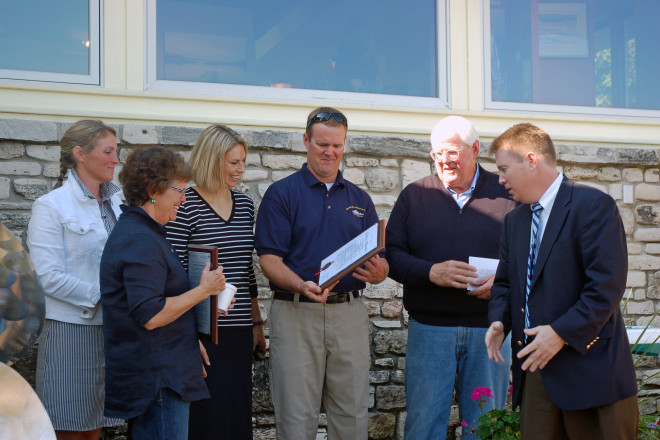 Hoyt Purinton (center), president and general manager of Washington Island Ferry Line, displays the commendation the ferry line received from Gov. Scott Walker in acknowledgement of 75 years of service at a ceremony on Sept. 25. Ed Eberle (right), administrator of the Wisconsin Department of Administration Division of Intergovernmental Relations, presented the commendation. Other members of the Purinton family who attended the event at the Northport Pier Visitor Center are Dick Purinton (second from right), Hoyt’s wife Kirsten, Dick’s wife Mary Jo and their daughter Evy Purinton Beneda. Photo by Jim Lundstrom.

With the sound of happy people and ferry commerce in the background, local and state officials gathered in front of the Northport Pier Visitor Center under a sunny sky and an unusually becalmed Death’s Door on Sept. 25 to recognize the Washington Island Ferry Line for 75 years of service.

The Purinton family was in attendance to represent the ferry line, including Dick Purinton, who referred to himself as merely a “40-year employee” of the ferry line, and his wife Mary Jo (daughter of ferry line co-founder Arni Richter); their son Hoyt, who serves as president, general manager and ferry captain, and his wife, Kirsten; and Dick and Mary Jo’s daughter Evy Purinton Beneda.

Many of the speakers referred to the ferry service as “the lifeline for the island,” and Moneypenny called it the “unofficial title” of the service. He added that the ferry service helps Door County to stand out from other tourism destinations and helps sustain the county’s $313 million tourism industry, as well as providing critical jobs and income to the island community.

In presenting the Governor’s commendation, Eberle said the service was being recognized for providing safe and reliable round-trip service – up to 25 round trips during the high season daily and two round trips daily in the winter.

“What a great testament to all of you, a fourth-generation family-owned business,” he said.

Speaking for the family and the ferry service, Dick Purinton said it has taken a great team of employees to keep the service running.

“It take those kind of people to make this kind of service run on a daily basis,” he said. “High winds, moving ice and other things can make for a difficult run, but our crews do the best they can to provide that service on a daily basis.”

But he added it also takes a solid customer base, support at all levels of government from the local township to federal agencies, and proximity to the shipbuilders of Sturgeon Bay to have made the ferry line a success.

“All of our ferries, I like to point out as Arni did, were designed by Sturgeon Bay naval architects, constructed by Sturgeon Bay shipbuilders. These products have never left Door County waters. They will never leave Door County. We are fortunate to have that technical expertise.”

Pointing out that he has one foot out of the door after 40 years of working for the ferry line, he mentioned that his father-in-law, Arni Richter, who founded the company with his father, Carl, spent 62 years with the ferry line before retiring.

Even after retirement, Purinton said Arni Richter would sit in a van and marvel at the growth of the company he and his father founded in 1940 with two wooden ferries.

Purinton said the changes that have taken place may seem small and incremental, “but cumulatively they are big changes and they mean a lot, not only to residents and property owners of Washington Island, but to the general public as a whole, and, hopefully a contribution to the area and state economy.

“I think today’s ceremony would certainly bring pride and a sense of fulfillment for the continuation of efforts if Carl Richter and his son Arni were able to see what was happening here today.”