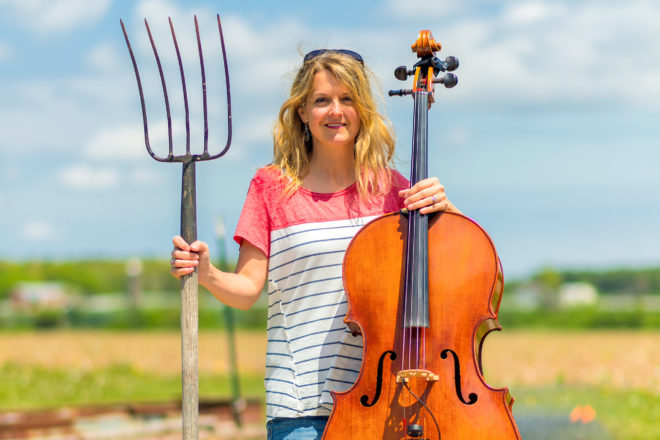 Sturgeon Bay cellist Kim Souther celebrates the very best of her life in the Door County countryside: boundary-breaking music and the expansion of her backyard concert series, Back Porch Sessions. Photo by Len Villano.

Few music venues in Door County can claim a concert finale as spectacular as that of a rising harvest moon or boast of the acoustics provided by repurposed tree trunks on a rustic stage amid the ambiance only a cornfield can provide.

Welcome to one of the peninsula’s newest music series: Kim Souther’s Back Porch Sessions, set among 50 acres of farmland in Sturgeon Bay’s countryside. Established in 2016, the concert series is an invitation to experience the sights and sounds of varied regional musicians with a side of yard games and a post-concert bonfire. At the helm is avant-garde cellist Kim Souther, who in recent years has performed alongside musicians like cellist Mike Block of the Silk Road Ensemble, Mark Wood of the Trans-Siberian Orchestra, Fox Valley’s Vic Ferrari Band, and many others.

Back Porch Sessions originated two years ago as private house concerts featuring Souther on cello. At the time, she had just begun pushing the boundaries of her instrument in sound and technique, toying with electronics, playing genres beyond classical, and incorporating various utensils to achieve unique sounds with her instrument. The real game changer came when she studied with cellist Mike Block, who has been called “the ideal musician of the 21st century” by musical icon Yo-Yo Ma.

“I was completely invigorated, totally excited about composing and the fusion of genres and not playing classically and really pushing the boundaries of the cello,” Souther said. “So I came back home and I wanted to share my newly found desires with everyone around me. I just started inviting people to our house and playing for them. I did that for a year and every concert that I gave I had more people attending until our back porch was full and we were having to go into the yard.”

Musician friends from Northeastern Wisconsin began joining Souther on those sessions and after her husband, Shannon, built a small stage in their backyard, it beckoned a larger audience. Kim Souther’s Back Porch Sessions was born. During the summer of 2016, the Southers invited the public to bring a picnic and blanket to enjoy the sights of their countryside yard and the sounds of musicians performing various genres, from jazz standards and bluegrass to Brazilian and blues.

Souther likens opening her home to the public for these concerts to composing a new piece of music – “it’s sharing a bit of your soul with people and allowing them into your life.” 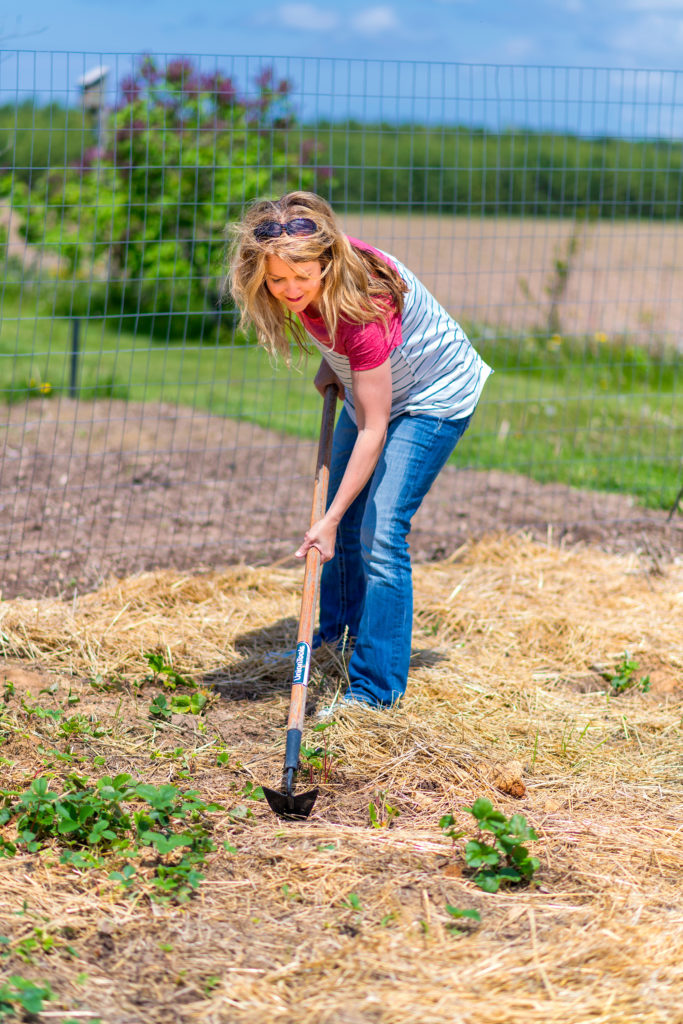 Kim Souther works the soil in the Charity Garden at her Sturgeon Bay home. The garden is a community-oriented addition to her summer concert series, Back Porch Sessions. Photo by Len Villano.

“I feel a little bit more vulnerable with inviting the general public but I also love to enlighten people and let them know that there is so much more music available to them than what they hear on the radio,” Souther said. “A lot of the people that attended last year had never heard of progressive bluegrass or any of these folk style writings or even some of the jazz that we presented last year. It was just completely new so I found a lot of joy educating people about what’s out there and encouraging them to seek it for themselves as well.”

Following last year’s successful series, during which she presented and performed with musicians during six concerts, Souther decided to make Back Porch Sessions its own business. She spent the bulk of winter and early spring networking with musician friends to find new musical acts to bring to Door County. They have made some adjustments to the concert space as well, moving the stage beside their produce gardens and building a backdrop for the stage out of old barn wood and timber.

Most significantly of all is a new community-oriented approach to the series: the development of a Charity Garden, inspired by Kim and Shannon’s discovery of City on a Hill, a Milwaukee nonprofit working to alleviate the symptoms of chronic poverty in inner-city neighborhoods by working with youth and engaging organizations and civic leaders to find solutions to poverty.

The Southers donated fresh produce to the organization and began exploring ways to put their property to use in service of the greater Door County community. This spring, they dedicated a one-acre plot of land to growing produce that will benefit local organizations, like churches offering free community dinners and the Boys and Girls Club of Door County, along with private citizens experiencing hard times.

“We’re trying to let everybody know that it’s here so if you know someone who has a need or is going through a financial crisis or unemployment or just really are not able to afford to do this, it’s here,” Souther said. “It’s available for the county.”

The community aspect doesn’t end there. At 4:30 pm on concert days, the Southers invite anyone interested to put an hour’s worth of work into the garden in exchange for admission to that evening’s Back Porch Session concert.

Whether people get their hands in the dirt or not, Souther hopes to provide a reprieve from the grind of daily life – one in which families and friends can come together to enjoy the simple joys of music and community.

“I just hope that people can come out here and be refreshed and just kind of take a breather from what life is throwing at us these days, honestly,” Souther said. “It’s a really peaceful place, our backyard, when the crop really starts to come up. It gives you the opportunity to forget. I’m not saying we should forget everything that’s going on in the world but it is nice to take a break. I hope that we provide that for people, I hope that they can see that humanity can ultimately be good. We can do good things, we can make good decisions and that there’s hope. Just a sense of hope.”

The back porch opens at 6 pm with concerts beginning at 7 pm. Bring a blanket or chair and picnic basket. S’mores and bonfire conclude the evening. Tickets can be purchased at brownpapertickets.com or at the door. Kim Souther’s Back Porch Sessions are held at 5440 Reynolds Road, Sturgeon Bay.