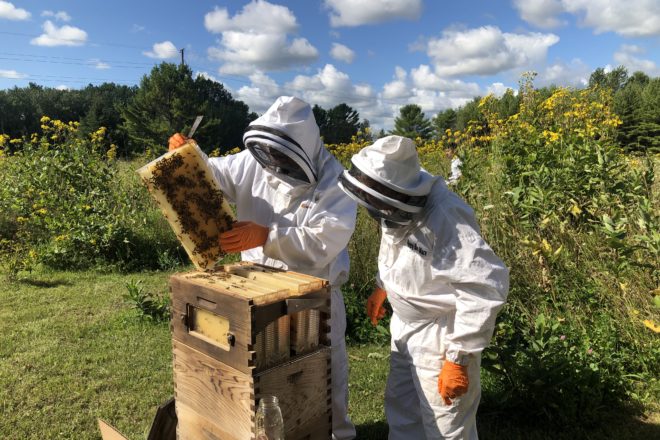 The Sturgeon Bay Common Council approved a permit last week for a local couple to keep bees. It’s the third beekeeping permit the city has issued since July 2017, when the ordinance was passed to allow beekeeping within city limits. Another request is in the pipeline for a residence on South 18th Avenue.

Beekeeping – even in urban areas – is on the rise across the country and state as residents learn the rewards and benefits of keeping the busy pollinators active and healthy within their community.

“This isn’t unusual,” said Mark Lentz, a beekeeper who keeps three hives at his southern Door County property, harvesting honey for home use and to give to friends and neighbors. “Green Bay, Manitowoc, Oshkosh allow it, and I’m sure other cities across the state and country.”

Lentz helped to usher Sturgeon Bay’s ordinance through passage in 2017.

“We were interested not to protect the beekeeper, but the people who lived around them,” Lentz said. “We wanted to make sure people knew what was going on and had an opportunity to voice their concerns during the process.”

The “we” Lentz spoke of is the approximately 80-member Door County Beekeepers Club. The group shares experiences and resources and helps new beekeepers, seasoned beekeepers and everyone in between. In addition to his own hives, Lentz cares for the two hives that the Beekeepers Club keeps at Crossroads at Big Creek. Located within city limits on Michigan Street, Crossroads is one of the city’s three beekeeping permit holders. The other belongs to Sturgeon Bay resident Gretchen Schmelzer, a founder of the Beekeepers Club and the reason why the group discovered that beekeeping wasn’t allowed within city limits.

“I had a bee apiary already, and I didn’t realize it was against the ordinance,” she said. “So we got together and did this.”

There were a lot of questions at the time, but only one voice of opposition from someone who was allergic to bee stings. But stings are less likely with honeybees, Lentz explained, and honeybees are the only species allowed under the city’s ordinance.

“They aren’t aggressive,” he said. “They don’t sting unless they feel threatened. Just to walk by a hive, they’re not going to bother you.”

Schmelzer said that “nobody’s ever complained” about the hives she keeps on her two-acre property on Louisiana Street. That’s been the experience of Christopher Sullivan-Robinson as well. The planner and zoning administrator within the City of Sturgeon Bay’s community-development department oversees the permitting for beekeeping. He’s received no complaints since the first two permits were issued to Crossroads and Schmelzer, and no objections prior to issuance.

That wasn’t necessary for the three permits that have been issued, including last week’s to Jesse and Samantha Koyen.

The initial beekeeping permit is for one year, and if it’s renewed, it’s then good for three years. A maximum of two hives per lot is allowed. Among the numerous requirements that the ordinance outlines are that the beekeeping equipment must be 25 feet from neighboring property lines, and a notice must be sent to all adjacent properties within 100 feet of the hive locations prior to permit approval.

That process for the latest permit issued to the Koyens initially produced an objection letter from a neighboring property owner who formally withdrew the objection upon receiving more information, Sullivan-Robinson said, and the permit was approved.

A honeybee hive, or colony, consists of a single queen, hundreds of male drones and between 30,000 and 60,000 female worker bees.They fly more than half a mile, on average, during their food-foraging excursions, traveling up to three miles per trip. That means they won’t be congregating solely on the flowers next door.

“I can understand the idea of having 60,000 insects that could cause you a little harm isn’t exciting, but bees have to forage in great detail and distance – 50 to 100 flowers every visit,” Jesse Koyen said. “So this doesn’t really increase bees on your property. They’re sort of competing for resources. Just because you have bees next door doesn’t necessarily mean you’re going to have bees on your property.”

As honeybees gather pollen and nectar for themselves and their young, they pollinate plants, including agricultural crops. Some crops, such as blueberries and cherries, are 90 percent dependent on honeybee pollination, according to the American Beekeeping Federation. Almonds depend entirely on honeybees for pollination at bloom time.

“One out of every three mouthfuls of food that we take is related to honeybee pollination,” Koyen said. “They pollinate more than 100 crops.”

Koyen talks about honeybees with the knowledge of someone who has kept 12 hives on Washington Island as a sideline business because that’s what he once did. He gave them up after charting a different course that took him to Massachusetts and graduate work before heading back to Door County.

Home these days is a property of less than half an acre on Texas Street in Sturgeon Bay with his wife, a Massachusetts native. This time, his beekeeping will be strictly a hobby that will enable him to harvest honey and beeswax products while contributing to pollinating local crops and fertilizing native plants.

“We’re trying to do our part here on our little property in Sturgeon Bay to help native food webs and agriculture where it happens,” Koyen said.