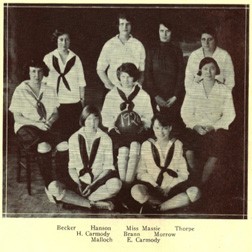 Kordon (Class of 1982) and Paula Anschutz (Class of 2005) are consistently at the top of the stats charts for the last 35 years of record keeping at Gibraltar High School.

They are also similar because they are now coaching the next generation of Gibraltar girls’ basketball players. Kordon coached the seventh grade team, and Anschutz the eighth; both teams wrapped up with a winning season.

In doing her research, Peil found that Baileys Harbor has been producing winning women’s basketball players for almost 90 years. Lenore (Brann) John was captain of the 1926 Gibraltar girls team and their record in the 1926 yearbook proclaims them to be “…adjudged the champion team…presented with a silver cup.”

Send any sports stories or pictures related to Baileys Harbor to [email protected].