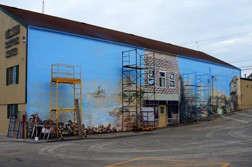 The Baileys Harbor Historical Society accepted a donation from the Cordon Family Foundation that will insure the addition of native flora and fauna to the Baileys Harbor Community Mural. While $10,000 is still needed toward the completion of phase one, the foundation’s donation will cover a major portion of the detailed second phase.

Artist Ram Rojas is working this winter on an addition to the depiction of the Brann Bros. Store, which anchors the 96-foot long mural. This detail will increase the three-dimensional effect for viewers. Rojas will begin work at the site when the weather permits; he intends to complete all of phases one and two before fall of 2013.

Project coordinator Nancy Rafal is looking forward to the addition of Lorine Niedecker’s poetry to the mural. “Niedecker’s ‘Wintergreen Ridge’ poem was what started this project a year ago,” remarked Rafal.

The mural is on the north side of Nelson Shopping Center. Donations can be sent to Baileys Harbor Historical Society, c/o Nancy Rafal, PO Box 340, Baileys Harbor, WI, 54202.