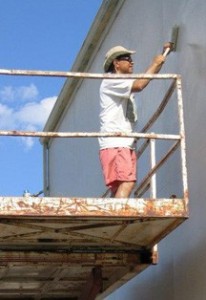 Work on the Baileys Harbor Community Mural recently began on the wall of Nelson’s Shopping Center in Baileys Harbor. Over 50 panels were installed and primed; and muralist Ram Rojas worked at night to project images onto the wall as guide marks for the painting.

The Brann Bros Store, which stood on the site of Nelson’s shopping center, is the central depiction. The old postcard photograph of the building was initially a puzzle for project coordinator Nancy Rafal. Rafal thought the building was brick or textured concrete block but was still uncertain. Rafal learned more about the building through online research and local historian Maryann Johnson directed her to other source material.

Poetry will also be featured in the mural. Lorine Niedecker (1903-1970) wrote “Wintergreen Ridge” after visiting the Ridges Sanctuary in the 1960s and lines from the poem will be ‘hidden’ throughout the mural.

Rafal is excited about another aspect of the project, and said, “We’re calling it a ‘dynamic’ mural. In five or so years Rojas can return and switch out some features, perhaps adding Boynton Chapel or other historically relevant features. This will keep the mural changing and evolving.”