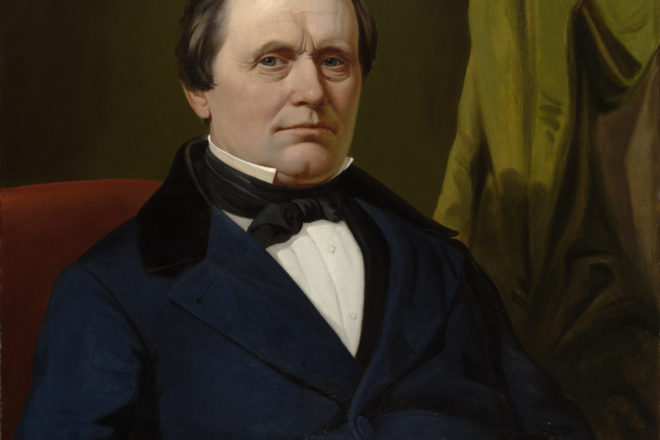 A portrait of Alanson Sweet by artist Samuel Marsden Brookes, who received $40 payment for the portrait. Courtesy of the Wisconsin Historical Society.

If pioneer entrepreneur Alanson Sweet had been an egomaniac, Baileys Harbor might be known today as Sweets Harbor. Instead, the place was named for the captain of one of the Milwaukee businessman’s Great Lakes schooners, Capt. Justice Bailey.

Fearing for the safety of the two-masted schooner Gazelle during a violent storm in October of 1848, Capt. Bailey found safe harbor at the then-unnamed location.

Bailey used the fall storm as an excuse to explore the uncharted lands and eventually returned with the Gazelle to the Port of Milwaukee with a tale for his employer about virgin forests and fine building stone.

Sweet saw a golden opportunity and that next summer dispatched a crew to build a pier so his fleet of boats could haul wood and stone for the Milwaukee and Chicago markets. By October 1849, Sweet had replaced the leader of the first crew with an employee named Solomon Beery.

“During the winter of 1849 and ’50 we got out timber to finish the pier, and cut and got out some two thousand and five hundred cords of wood for shipment,” Beery wrote in a January 17, 1881, letter to early Door County historian Charles Martin.

In that same letter, Beery tells Martin about his crew cutting a wagon or sleigh road northwest from Baileys Harbor across the peninsula to the bay of Green Bay, opposite Hat Island. He believed it to be the first road across the peninsula. You can follow the same road today by driving County F. “At that time traveling and business were done by boats and vessels in the summer, and on the ice in winter,” Beery wrote.

Beery went on to serve as town clerk and postmaster in Baileys Harbor.

But getting back to Mr. Sweet, this New York native had a significant impact in Chicago, Milwaukee, early Door County and other parts of Wisconsin until moving to Kansas in the early 1860s.

Sweet is considered to be one of the 12 founders of Chicago who voted for incorporation on August 5, 1833. He is credited with erecting the first two-story frame house and brick building in Chicago. In 1834 Sweet was elected to the Cook County Board of Commissioners.

But Sweet somehow became convinced that Milwaukee would become the premier harbor city on Lake Michigan, so on May 14, 1835, the 31-year-old Sweet arrived in Milwaukee. Sweet acted with such momentum that by the fall of 1835, he was elected to represent Milwaukee County in the first territorial legislature.

“He became at once a noted character throughout the State…and for some time was by far the most popular man in the county now comprising the counties of Milwaukee and Waukesha,” states Sweet’s section in the 1881 History of Milwaukee, Wisconsin.

An unnamed “old settler” described Sweet for the above-mentioned history:  “He is about six feet in height, of a fine physique, speaks slow and distinct, has a large brain, good executive abilities, knows the value of money, and is one of the men who always keep it moving. He built largely in Milwaukee, such as dwellings, stores and vessels, and the first steam elevator was built by him. He also constructed many of the lighthouses for the Government upon the lakes [Sweet is credited with responsibility for 11 Great Lakes lighthouses, including the first lighthouse at Baileys Harbor in 1851, which was replaced by the range lights in 1866], and the custom house at Mobile, Ala. Mr. Sweet, in his latter years, became involved in law-suits and lost his property, after which he removed to Kansas.”

When that territorial legislature was seeking a state capital from among 14 potential sites, it was Sweet who proposed that Madison be named the capital city. His motion was adopted on a seven to six vote, and for supporting Madison, Sweet’s Milwaukee constituents hung him in effigy.

You can find correspondence online from the 1850s between Sweet and various federal authorities — including U.S. Secretary of War Jefferson Davis — regarding building materials Sweet and two partners supplied for the creation of the ports of Milwaukee, Sheboygan and Manitowoc.

It was in the 1840s that Sweet began building boats to ship grain to Buffalo, New York. Those cargo vessels would return to Milwaukee empty, until Capt. Bailey returned with news of wood and stone in the safe harbor he had found on the remote peninsula.

That prompted Sweet to purchase land, build the first pier on the peninsula and establish a community. He named the settlement Gibraltar and in 1851 got the state Legislature to set off the peninsula as its own county (although that did not become official until 1861). Sweet also petitioned to have “Gibraltar” named the county seat, not only for its potential as a commercial center for shipping, but also because it was halfway between the southern and northern boundaries of the new county, and it was considered the county seat until an 1857 election set the county seat at Sturgeon Bay.

For reasons unrecorded, Sweet’s business concerns in Door County floundered and he focused his “large brain” on other matters. Those who remained — Solomon Beery, Moses Kilgore, Miles Carrington, Adam Hendricks, A.K. Lee, Hugh Collins and a few others — reverted to calling the community Baileys Harbor.

To those who think the community’s founders were illiterate by leaving the apostrophe out of Baileys Harbor (rather than Bailey’s Harbor), you can quit blaming them. Blame the U.S. government instead. The Domestic Names Committee of the U.S. Board on Geographic Names does not like apostrophes in the names of public places because it implies private ownership. In its 126 years of existence, the board has allowed only five place names with apostrophes, including Martha’s Vineyard.