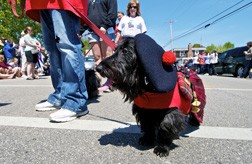 A little Scot struts his stuff during last year’s Parade of Scots. Photo by Len Villano.

What began as a small gathering of Scottish Terriers and their owners in Door County has now become an international event. Those bagpipes will soon be beckoning attendees from across North America, Australia and South Africa into Baileys Harbor for the 13th Annual Door County Scottie Rally on May 18.

While the rally is held on private property and requires admission, the annual “Parade of Scots” is free and open to the public. The Clan Donald Pipe and Drum Corps will once again lead the parade. Two and four-legged parade participants are encouraged to dress up according to this year’s theme: “A Baker’s Dozen.”

Many of the dogs have been rescued and found their forever second-chance homes. In the past 13 years this gathering of Scottie devotees around North America has raised over $96,000 to support Scottish terrier health-related research and Scottie Rescue.

For more information or to purchase Scottie Rally shirts and memorabilia visit doorcountyscottierally.com or call 920.493.5878.