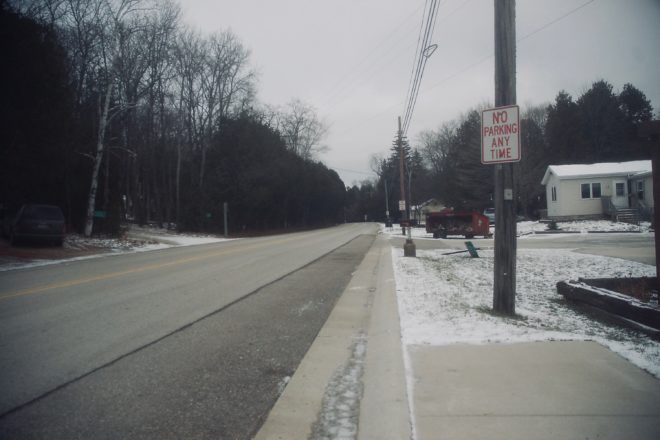 Here is where the sidewalk ends on County F. Photo by Jim Lundstrom.

The Town of Baileys Harbor is considering extending the sidewalk that ends at the top of Park Road along winding County F to County EE.

The town’s Plan Commission heard Dec. 3 from town engineer Steve Parent, who said town chair Don Sitte asked him to look at what it would cost to add sidewalks on that stretch of well-traveled road with three busy campgrounds – Baileys Grove Campground, which is right on the stretch of road in question, Beantown Campground, a little farther on F after it splits from EE, and Baileys Woods Campground on EE.

“People walk it frequently. They enjoy the walk into town,” said Plan Commission Chair James Shorer. “It’s a little hazardous walking the way it is.”

Parent said a very preliminary investigation puts the sidewalk cost in the neighborhood of $120,000, saying it will be an expensive project because of the grade of the road, trees that would have to be cut and dealing with culverts in existing driveways and retaining walls.

“You’re always dealing with changes in elevation, so it can get kind of expensive,” he said.

Parent said he had already talked to county Highway Commissioner John Kolodziej about another, lower-cost option that would add a widened paved shoulder rather than a dedicated bicycle-pedestrian route with specific requirements for width.

Town Chair Sitte is not a member of the Plan Commission, but he was at the meeting, and he suggested a phased-in plan that could begin with extending the sidewalk where it ends at the intersection of Park and County F. He also suggested that the idea be presented at the annual town meeting on April 16 to hear pros and cons of putting a sidewalk on County F.

In the meantime, Parent said he would talk with Kolodziej again to get some more specific cost estimates, and several members of the Plan Commission said they would walk the route and talk to some residents along the way to gauge opinion on the plan. Parent will return with more sidewalk information at the Feb. 4 Plan Commission meeting.

The commission also discussed whether Baileys Harbor has a parking problem. Member Tim Tischler brought up the idea that the town has a parking problem, to which several other members responded that there is plenty of unused parking in the town, and that the problem is more that people don’t like to walk a block or two, and that perhaps better signage is needed to direct people to other parking areas beyond the main corridor of town.