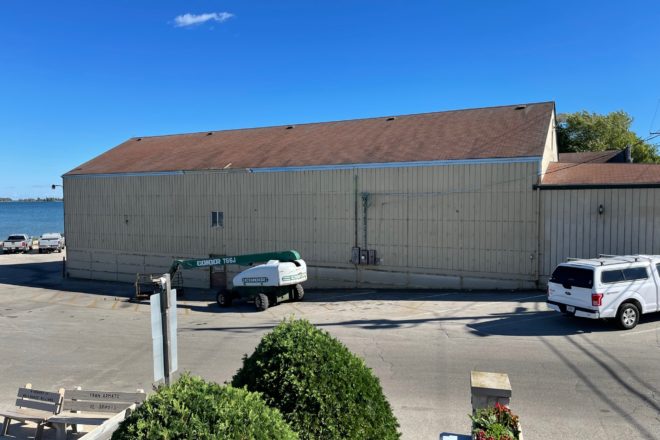 The mural that’s been a part of the character of downtown Baileys Harbor since 2013 has been removed and will be safely stored until a new use is found. Photo from the Baileys Harbor Community Mural Project Facebook page and by D.A. Fitzgerald.

A crew arrived the morning of Aug. 30 and finished removing the Baileys Harbor mural shortly after lunchtime.

Muralist Ram Rojas had finished painting the mural in 2013 on 67 laminated panels that had been secured to the north wall of the former Nelson’s Hardware building with stainless-steel, Phillips-head screws.

Eric Peil’s company, Peil Construction in Baileys Harbor, carefully unscrewed the screws, lowered the panels to the ground, and hauled them away to safe storage. Each of the 67 panels has been numbered and ordered.

“If they ever find a spot where it can be put together again, it will take very simple math,” Peil said.

The mural has come down because the building and its waterfront property along Baileys Harbor’s main street on Highway 57 were sold last year to the Town of Baileys Harbor. The buildings will be demolished, with perhaps one or more of them moved. Either way, the land will be vacated for a public green space that’s currently in the planning stages.

Baileys Harbor resident Nancy Rafal is not displeased with that.

Rafal, who is on the board of directors of the Baileys Harbor Historical Society, was the person behind the creation of the mural. Although it’s a celebration of Baileys Harbor history and people, it was originally intended to honor Fort Atkinson poet Lorine Niedecker and her poem “Wintergreen Ridge,” a work inspired by her visit to The Ridges Sanctuary during the 1960s.

“So I made it happen,” said Rafal, who is also a poet and served as Door County’s poet laureate between April 2019 and March 2021.

Rafal recalled that she asked the Nelsons in the winter of 2012 if the mural could be mounted to their building.

“They thought poetry was OK, but they thought the mural should have something to do with Baileys Harbor,” Rafal said.

So Rojas – commissioned by Rafal and the Baileys Harbor Historical Society, which raised funds for the project – painted the Baileys Harbor Community Mural Project panels, together measuring 96 feet by 22 feet, with historically and locally significant people and places prominent. But hidden throughout the mural are the verses of Niedecker’s poem.

“She was a very private person,” Rafal said about the poet who lived from 1903 to 1970, primarily in southern Wisconsin. “So I think it’s very appropriate that her words are not in the forefront.”

The panels are now safely in storage. Rafal joked that she had hoped if the mural ever came down, she would already have departed from this earth to escape the rehoming decision. Different people hold different opinions as to where the mural should be reinstalled. Nothing has yet been decided, though Rafal said she has some ideas – as do others – that aren’t ready for publication.

In the meantime, Rafal said the Baileys Harbor Historical Society could use donations to support the mural’s future installation and interim safeguarding.

“Storage is not cheap,” Rafal said.