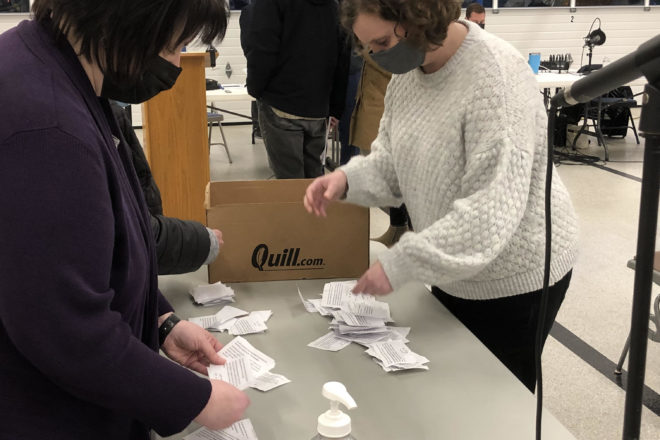 Deputy clerk Katie Virlee (right) helps Jane and Lois Pluff count votes on whether the Town of Baileys Harbor should purchase the former Nelson’s hardware and motel property for $1.95 million. Residents approved the purchase 255-32. Town Chair David Eliot said a private group has started a fund to offset the costs and has $471,000 in pledges already. Photo by Craig Sterrett.

It turned out that the Baileys Harbor Board of Supervisors was very much in tune with residents when it agreed to purchase the former Nelson’s hardware store and motel property for $1.95 million. Town residents overwhelmingly supported the purchase in a 255-32 vote Tuesday evening during the town’s annual meeting at the Baileys Harbor fire station.

Prior to the vote, outgoing Town Chair David Eliot said he began private fundraising to defray costs of the purchase and was now working with a group of citizens that had established the Baileys Harbor Open Space Preservation Fund. The fund had raised $471,800 in pledges as of Tuesday evening.

“There are five of us on the fundraising committee including myself, Paul Salm, David and Sally Smith, as well as Carrie Baldwin Smith,” Eliot said.

He said the first $600,000 raised would go toward the purchase price, and the next $500,000, if raised, would go to the town for rehabilitation or development costs.

Attorney Tyler Pluff explained contingencies in the town’s agreement with the Nelson family. An asbestos inspection and environmental evaluation will be completed prior to the sale. The town could terminate the contract if a massive asbestos-abatement project were needed prior to demolition.

Eliot said the property had a service station at one time with three 550-gallon gasoline tanks and a 220-gallon diesel tank, all of which have been removed. A leak in 1986 triggered a cleanup and installation of monitoring wells, and, after 22 years, the monitors no longer detected pollution.

Kangaroo Lake-area resident Norman Van Den Bussche said the town should have a contingency pertaining to lead paint. He also wondered, with two others, why the purchase price was $1.95 million, when the county listed the tax assessment around $1 million.

Moonlight Bay resident Carl Podlasek asked whether the town had had the property appraised. The town had not.

“This is the price that the seller is willing to sell it for and that we believe, as a town, that we can afford,” Eliot said.

Mariah Goode, a Baileys Harbor resident and director of the Door County Land Use Services Department, said the county’s “fair market value” and appraised value of properties are not the same thing. In addition, along shorefront especially, people frequently list properties for sale at almost twice the assessed, taxable value.

Residents also asked if a developer – not the town – purchased the property, would the development be constricted by state rules pertaining to setbacks away from Highway 57 and the Lake Michigan shoreline?

Goode said that in recent years, the state has loosened its rules pertaining to shoreline properties, and a developer could tear down the existing hardware store, motel and garage structures to construct a building, perhaps rectangular, as large as the three-dimensional boundaries of the existing buildings. Those shoreline-property rules, and the county zoning in effect for Baileys Harbor, would allow for a three-story, 35-foot-high building with up to 22 bedrooms, Goode said.

Town officials, including Eliot and town planning board members, have said they want to preserve the small-town feel of Baileys Harbor, and they’d like to see more public access to the shoreline.

West Meadow Road resident Adrian Murre said the acquisition of and creation of parkland along the shoreline was a positive step for Baileys Harbor that would prevent motel construction next to the marina. He said he wasn’t anti-development, but towns rarely have the opportunity to decide when and where development happens.

“If we don’t take this opportunity, make no mistake, this will be sold. It will be developed,” Murre said. “Nobody’s going to come in and buy a property for $1.95 million and give us a park.”

Eliot said he thought voters would have regrets if they did not approve the purchase. Don Sitte, who would become town chair at 12:01 am on April 21, said a “yes” vote meant Baileys Harbor residents wanted their town board, rather than a developer, to determine the future of the site.

Cana Island-area resident Sandra Richey said she would want to know how the town would use the property before voting in favor of the purchase. Eliot said some potential donors specified they would make donations only if it’s for open-space development. In addition, the town would have many opportunities to apply for grants for parkland and open space.

Setting an Oct. 29 closing date for the town’s purchase of the property gives at least seven tenants of the Nelson motel time to find a place to reside, Eliot said. He noted it’s difficult to find a reasonably priced place to stay in Baileys Harbor during summer and through September.