On Oct. 16, Baileys Harbor residents have the opportunity to discuss and vote to allow the town board to look into purchasing property downtown.

The property is 8061 State Hwy 57. It’s currently home to The Red Geranium boutique, once home to local conservationist Emma Toft, and could someday be home to the town’s visitor center and historical society.

“This kind of opportunity does not come up very often and if we pass it up then there’s the risk of it not being preserved at all,” said Town Supervisor Roberta Thelen. “It’s just such a great fit from my perspective. History, location, connection to the Ridges.” 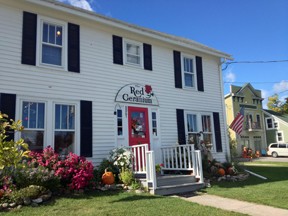 Toft helped preserve the Ridges Sanctuary, was on its board of directors for almost 30 years, and her family originally owned Toft Point and saved the area from logging. She’s painted on the town’s new mural on the side of Nelson’s Hardware, and was recently featured in a documentary called Emma Toft: One With Nature that aired on Wisconsin Public Television.

The building’s current owners, Kathy and Walter Vail, approached the town last year to see if the board members were interested in purchasing the property.

The Vails have owned the Red Geranium since 1994, 12 years after the previous owners bought the Toft Estate and moved the business there. Some of Toft’s belongings are still in the building, such as a box of books tucked away in storage, a table holding merchandise and an upstairs display of photos and furniture.

“It’s historic,” Kathy said. “It’s got meaning. I’m not a native of Door County, but it holds a lot of value for the town. I would not have ever gotten rid of Emma’s stuff.”

Kathy said she will leave Toft’s belongings in the building for the next owner.

If the town residents and board want to purchase the building, she has an agreement with the board to keep operating out of the building for the 2014 season. After that year she plans to rent space in Baileys Harbor and move The Red Geranium to a new location.

“We’re not in a hurry, it’s just that to me if you pass up this opportunity it could easily never present itself again,” Thelen said.

The property is appraised at $173,000, and has only had a few updates since it was Toft’s home. The staircase was moved, and a small addition was put on the back of the building. The kitchen and furnaces were removed to make space for updated heating and merchandise display.

The building was appraised and found in good condition for a home built in 1868. Thelen said there’s still more work to be done before moving forward, even if the town residents and board supervisors support the idea.

“I can’t say how it’s going to be paid for or how the whole operating process will go because it’s just going to have to evolve,” Thelen said. “All I want to ask people is, ‘What is your vision for our town? Does this kind of idea fit into your vision?’ Because it does fit into mine.”

“It’s too significant to not let the town members have a voice,” Thelen said.