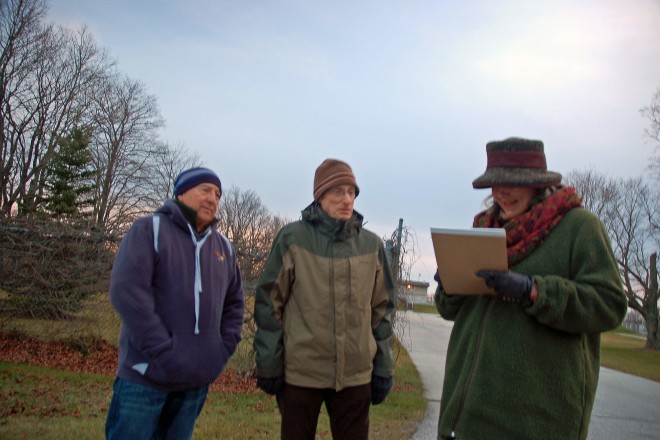 Baileys Harbor Town Board Chair Don Sitte, Plan Commission Chair Gordon Rowley and town Supervisor Barb Anschutz at the special meeting of the town board to look at how a dog park will fit into its new 40 acres. Photo by Jim Lundstrom.

The Baileys Harbor Town Board and Plan Commission convened a chilly, near-dusk outdoor meeting the afternoon of Nov. 20 to walk the area of a proposed town dog park on part of a 40-acre parcel the town recently bought.

Although the town had two sites in mind, everyone who attended the meeting agreed that a site next to the wastewater treatment plant is a perfect location for a good-sized dog park. The site includes a berm that the town will incorporate into the big dog section of the park.

“We have moved the park three times,” said town chair Don Sitte. “We had it behind the baseball diamond, then the public works building, and now because of all this property here, instead of destroying the recreational park area, we’ll put it over by the berm. It just makes more sense.”

The idea for the dog park came from resident requests. As town officials walked the site, they figured it would be about 200 feet deep, with separate areas and entrances/exits for big and small dogs.

“Two gates for each entrance, otherwise, if somebody walks in and five dogs get out, it’s chaos,” said Brynn Swanson of the Baileys Harbor Community Association. “Sister Bay and Egg Harbor both have double gates. Sort of like a breezeway.”

There was also discussion of whether to put an announcement out about walking dogs through the property on a leash.

“It’s already a town ordinance that your dog has to be on a leash. Let’s leave it at that,” said Town Supervisor Bobby Schultz.

Schultz had also scoped out an area that could easily be cleared to make room for a small parking area for up to four or five cars, but he added that a forester should be hired to go through the entire property to mark trees for removal.

“You’ve got to keep it trimmed down a little bit, otherwise you’ll have a big forest in here and nobody’s gonna want to do stuff here,” Schultz said.

The group started to walk down the road to the far end of the property which was also being considered for a dog park site, but Schultz said it would require much more work and is closer to residences. Everyone agreed the site next to the wastewater treatment plant is perfect for the dog park.

The next step is for town engineer Steve Parent to draw up plans for the dog park for either the Dec. 14 or January town board meeting.

“We’re hoping that the park will be done and approved by Dec. 14 or the January meeting,” Sitte said. “Then April 1 will we start to put it in and hopefully have it all done by May 1. We have a little more than $3,100 in donations so far and $30,000 in the budget to do this as well. And there’s more donations coming in as we speak. Once we get settled on where it’s exactly going to go, more donations will come.”

“It was kind of hard to fundraise until we had a definite location,” Swanson said.