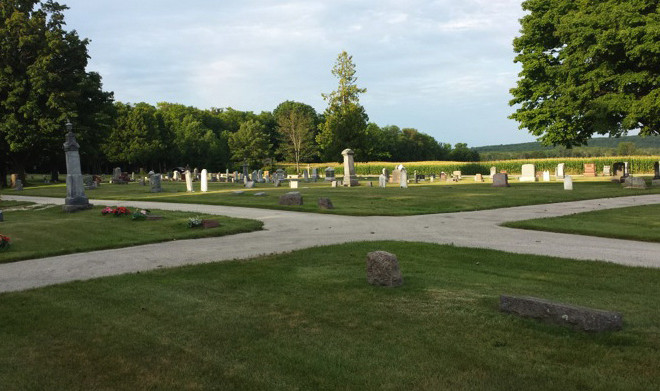 Susie Bauldry has deep roots in Baileys Harbor. Her great-grandfather, Karl Peil, planted the avenue of trees leading out of town on County Road F. Her grandmother, Hedwig Peil, was the mail-order bride from Germany who worked with Winifred Boynton to plant the wonderful gardens at Björklunden. And Susie’s dad, Rollie Peil, was for years the person who dug the graves at the local cemetery and seven others in northern Door County.

Susie and her siblings often accompanied their dad to the local cemetery. In fact, they considered it their personal playground. She said they never thought of it as a scary place, but a beautiful spot where Grandma and other loved ones were now. When her dad finished digging a grave, the children always looked in, sure this was the time they’d see buried treasure. Sometimes they did spot old bones, proof that the area had been a burial ground before the cemetery was established in 1889. In later years, Susie’s husband and their son and her brother Loren’s son all gave Rollie a hand. 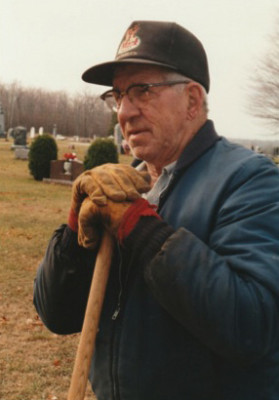 It was only logical when Susie was elected to the town board in 1990 that she be put in charge of the cemetery committee. The recent program she gave for the Baileys Harbor Historical Society detailed the cemetery’s history and the records she has compiled for it.

Rollie Peil dug his first grave at age 15 and was paid $10. He continued to age 84. It was not an easy job. In the winter, he often built a fire on the gravesite to thaw the ground. One bitter February, it took four men two-and-a-half days using pick axes, sledgehammers and wedges, metal bars, shovels and strong backs to dig a single grave.

Baileys Harbor purchased the first land for a future cemetery from Mrs. A. M. Fry in 1863, but it was not plotted until 1889. A 20’ x 20’ plot, large enough for eight graves, sold for $2. (Now a single plot costs $125 for a Baileys Harbor resident and $1,000 for a non-resident.) Others who sold land for the original cemetery included Moses Kilgore, Andrew and John Brann, Roger Eataugh and Otto Peil, Susie’s grandfather. More recently, the town paid $70,000 in 1999 for seven acres across Cherry Road for an eventual expansion. The cemetery is divided into Town and Catholic sections. Both are maintained by Baileys Harbor – the Town section supported by taxes and the Catholic section by payment.

In the early years, there were complaints about cows roaming through the cemetery. Matt Hruska was paid $23 to level the ground, stake and number the gravesites, and Henry Starr received $68.20 for putting up a barbed wire fence.

The record Susie was given when she took on the Cemetery Committee was a piece of tagboard divided into one-inch squares with up to eight names penciled in each square. She viewed it as a challenge and also as an amazing history of the town that led her to hours of additional research.

She learned, for example, that a diphtheria epidemic in 1889 killed 16 Baileys Harbor children, ages one to 13. County records list those who died, but there are no headstones in the cemetery. Perhaps there was a Potter’s Field, but no evidence of that has been found. Town board records state that Dr. J. B. Rick, the local health officer, ordered that a guard be stationed outside the quarantined home of John Brann to make sure that no one went in or out. A Mr. Carrington took the job for $1.50 a day. He purchased groceries for the family and restricted dogs from running at large. The prescribed treatment was a gargle of old potash, iron and whiskey. Some of Brann’s stepchildren, three little Pfeifer girls, Minnie, Mary and Anna, and children from the Jorns, Kilgore, Peil, Shea, Jackson (or Jacobson) and Eataugh families were among those who died. The following May, the town held a memorial service for the children, who were not permitted public burial.

Because there were no corner markers for rows in the cemetery, Susie got the town board to approve purchasing them, and her dad and Ralph Franke helped her grid the cemetery, using massive amounts of stakes and binder twine.

Susie also compiled, for the first time, detailed records with information about every burial site, including anything unusual on the headstone. She prepared a reference sheet for each section in the cemetery, and cross-referenced the records by name and lot number. A book with a copy of the records is available in the library. For more recent information, contact Barb Anschutz, who’s the current head of the Cemetery Committee for the town board.

Some unusual experiences: Susie discovered that it was once necessary to have a burial certificate for a dog. (The certificate she found was for her grandfather’s pet.) A man looking for a burial site for himself and his wife lay on the ground and spread out his arms in four locations before finding one where he felt comfortable. Another man looking for his mother’s grave couldn’t find any record in her name. Fortunately, Susie’s dad remembered that she was buried in a plot belonging to her father. 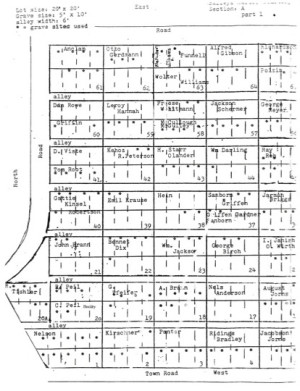 Susie noted that in most Christian cemeteries, people are traditionally buried facing east, based on the belief that when Jesus returns, they will rise from the grave facing his direction. This may have begun when Pagans buried the dead facing the rising sun.

Because many people during the 20th century installed stones ahead of time with their birth date and the numerals 19__ for their death (with the rest of the date to be filled in when they died), the 19 had to be removed and replaced with 20 when the new century began.

Greg Casperson provided Susie with information about early burial practices. Because most funeral homes in the early days did not employ an embalmer, a family that wanted a body embalmed had to pay one themselves. Generally, wakes were held at home, with burial within no more than three days. In hot weather, the body might be placed on a perforated wooden platform with ice underneath. Caskets were shipped in “rough boxes” that were used as vaults before concrete or metal were available.

The Baileys Harbor cemetery requires the use of a vault, although this is not true everywhere. Some states prohibit moving a casket across state lines. Embalming is not required. It is becoming more common to bury unembalmed bodies immediately, with a memorial service later. In the old days, caskets could be purchased at Brann’s Store, now the site of Cornerstone Pub.

Casperson shared pictures of an elegant early hearse that’s now in the Door County Historical Museum in Sturgeon Bay. Susie showed pictures of the long funeral procession for 17-year-old Grover Williams, who died in 1901, and of the burial of horseman Emery “Dynamite” Oldenburg, whose casket was, appropriately, borne to the cemetery in a horse-drawn carriage.

Susie spoke of two unusual deaths, reported in lurid detail in the newspapers. On June 26, 1919, town board members were called from a meeting to come to the tool shed at the cemetery, where Otto Bitzen from Kewaunee had committed suicide on the day he was to have married a local girl. The tombstone of Augusta Reh says “Shot in Lincoln Park” and includes a photo of her and the man who killed her – she rejected his proposal.

The oldest person buried in the cemetery is Grandma Honold, who died in 1982 at age 109. The youngest is Lizzie Williams, 20 months and 21 days. Susie’s great-great-grandmother, Augusta Langer, has a 100-year-old porcelain stone that was shipped from England. There’s a mystery about the oldest stone in the cemetery, belonging to Lydia (Darius) Griffin, who was born in 1823 and died in 1852, 37 years before the cemetery was established. Likely, it was moved from elsewhere.

Susie said when she was young, the custom was to leave only flowers on a loved one’s grave. Now other items are often seen. She says she used to think this was rather undignified, but had an epiphany when she saw a basketball on the grave of someone who loved the sport and realized his family was expressing their love for him.

The bell Susie had mounted near the cemetery pump (the original, and it still works) has a special story. When her husband Gene died, the grandchildren were told he was an angel, but they didn’t believe it, because they hadn’t heard a bell ring. The old dinner bell that belonged to Susie’s dad was rung at Gene’s funeral. Susie invites anyone who’d like to, to ring it for loved ones and then sit on one of the nearby benches to celebrate and rejoice in their lives.