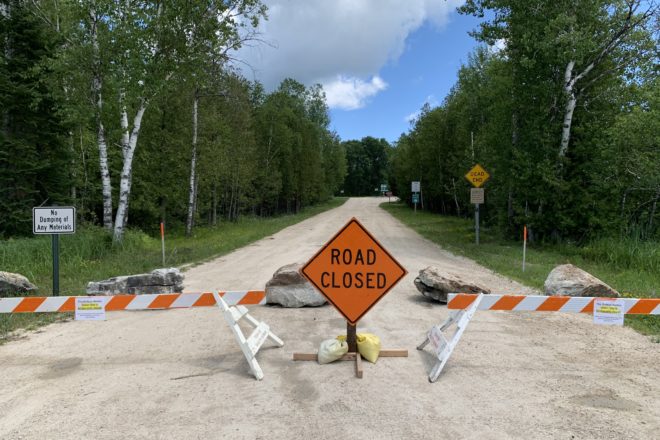 The Town of Baileys Harbor temporarily closed its green site because of illegal dumping at the site. Photo by Myles Dannhausen Jr.

Baileys Harbor Town Chair Doug Smith resigned July 12 after serving 14 months of his two-year term. In a letter to the board, Smith cited “private matters” as the reason for his resignation.

Vice Chair Barbara Anschutz will run the next regularly scheduled board meeting, where the board will set a date for a special meeting to appoint a new chair and decide what to do with the empty supervisor position. The July 13 meeting was canceled Monday for lack of quorum.

In his resignation letter, Smith suggested to the board that Anschutz be appointed chair.

Smith defeated incumbent Town Chair Don Sitte in April of 2019. Smith had previously served as the town’s clerk/administrator for 10 years, resigning from that position in March of 2017.

A few bad apples have spoiled the bunch for users of Baileys Harbor’s Green Site. The town was forced to close the Green Site last week because of “an astronomical amount of illegal dumping,” according to Town Clerk Haley Adams.

The town has had problems with people dumping garbage and misusing recycling bins for years. Some residents, nonresidents and contractors have abused the site, leaving refrigerators, toilets, carpeting and many other nonrecyclable items.

That has escalated during recent weeks, and the town has been forced to take multiple runs to dump trash at Going Garbage at a cost of more than $1,000 each time, Adams said.

The Green Site was created several years ago as a spot for Baileys Harbor residents to dump yard waste, brush and recycling. Residents can also pick up soil and mulch there.

The site is marked with clear signage outlining who is allowed to use it and the rules for its use, but because it is not always staffed, those rules cannot be fully enforced. Town Supervisor Roberta Thelen said in a recent Peninsula Pulse letter to the editor that the site “could be considered a failed honor-system experiment.”

The Baileys Harbor town board is expected to take up the issue during its July 13 meeting.