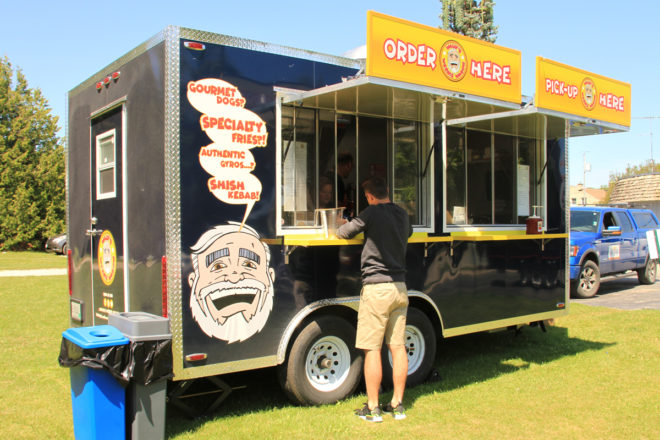 During a recent trip to the Big Apple, one of the meals I indulged in was a street-vendor hot dog. There’s something distinctive about the experience of biting into a fresh-off-the-roller hot dog – no silverware, plate or dining table required. Normally, you would have to head to metropolitan areas such as Chicago or NYC (or a reputable ballpark) to partake, but now you can get the same – or, I’d argue, even better – experience right here in Baileys Harbor.

Wally’s Weenie Wagon, which you’ll find parked between Bearded Heart and Lakeshore Adventures on Highway 57, offers an extended menu of Vienna beef hot dogs ranging from the classics to the more dressed-up varieties. Take the Chicago Dog, a “dragged through the garden” hot dog that’s famously served in the Windy City: a Vienna beef hot dog with pickle, sport peppers, relish, mustard, onion, celery salt and tomato on a poppy-seed bun. And of course there’s the street-corner standard, the Naked Dog: a beef dog served condimentless on a poppy-seed bun.

If you’re looking for something different, take a walk on the wild weenie side with options such as the Bahn Mi dog, the Cherry Barbecue Bacon dog or the Danger Dog. The Bahn Mi meshes the Vietnamese staple with a hot dog by using cucumber, pickled radish, pickled carrot, cilantro, jalapeño and Sriracha-lime mayo as toppings. The Cherry Barbecue Bacon dog gives a nod to the peninsula with a Seaquist cherry-barbecue sauce and Coyote Roadhouse’s coleslaw on top of a bacon-wrapped, deep-fried hot dog. The Danger Dog goes in a more unexpected direction, with the hot dog wrapped in bacon and deep fried, then topped with Sriracha sauce, fried onions, fried jalapeño and Sriracha mayo.

But that’s not all! There’s more to Wally’s wagon than just weenies. The food truck is also equipped with a large gyro spit that makes it possible to have freshly carved lamb and beef meat on a pita topped with onion, tomato and tzatziki sauce. The food-truck owner, Wally Vartanian – who operates the truck along with his wife, Traci – said that this Greek cuisine has been a family specialty for decades, making it a no-brainer addition to the menu.

If your appetite is large enough, or if you’re looking for more of a shareable snack, the truck also serves freshly cut fry creations. Choose from chili-cheese fries, garlic-Parmesan fries, Greek fries (with the option to add gyro meat), or poutine – Canadian-style fries with gravy, shredded cheddar cheese and Renard’s cheese curds.

The weenie wagon has been in the works since 2004, when Wally and his father, also named Wally, began a running joke about pivoting from their third-generation flooring business to a hot dog stand that traveled around Door County. In the beginning, it was just good fun – until the idea started to grow on them in earnest.

With the intention of giving this new business idea a shot, plans were set in motion to close the flooring business in 2014 and begin Wally’s Weenie Wagon. Sadly, the unexpected passing of Wally Senior that year put the plans on hold. Eventually, though, the idea regained its momentum until the truck officially launched on July 4, 2019. The original Wally is still a part of Wally’s Weenie Wagon, both in spirit and through his likeness, which forms the logo.

Wally’s Weenie Wagon is open on Mondays, 11 am – 3 pm; Wednesdays and Thursdays, 11 am – 6 pm; and Fridays and Saturdays, 11 am – 2 pm and 8-11 pm. It’s closed on Tuesdays. Check its Facebook page for updates: facebook.com/wallysweeniewagon.

*The weekend of August 9-11 Wally’s will not be open for the evening shifts.