The debate over Baileys Harbor’s core expansion took an unexpected turn Nov. 30 when Town Chairman James Parent asked the joint town board and plan commission to take the proposal to an advisory referendum in April.

The previous meeting on Nov. 9 ended with a general consensus to move forward with discussion of details for an image corridor along the entrance to the town on Highway 57 to serve as a buffer between the highway and commercial development in the extended core.

The agenda for the Nov. 30 meeting called for a final decision on the core extension and parameters for an image corridor to maintain the natural aesthetic of the entrance to town from the south.

But Parent (who had recused himself from the previous two meetings because his father owns 80 acres at the center of the debate) stepped back in to preside over the meeting and surprised the audience with a 13-minute speech.

“Overall I guess things are moving in the right direction,” Parent said, “however I think we’ve come to an impasse.”

He said discussions in the town had taken a toll on board and plan commission officials.

“I think it’s gotten pretty poisoned, the whole discussion, the whole process,” he said. “There’s so much anger, half-truths, and outright lies. Vicious smears and things going on that I don’t even know if it’s fair anymore to ask the people up here to make decisions on this. It’s tough to sit up here psychologically and emotionally.” 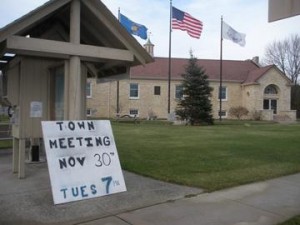 Signs were placed throughout Baileys Harbor in advance of the Nov. 30 meeting.

Parent was upset by a letter to the editor published in the Nov. 23 edition of the Peninsula Pulse that questioned the operations of the town board. He also expressed his displeasure with the plywood signs placed throughout the town Nov. 29 to protest the expansion of the core. The signs read “this is our town core” and labeled some businesses as “new growth.” One sign placed on Joe Parent’s property asked “What is smart growth?”

Though all but two of the town board and plan commission members have steadfastly supported the core extension throughout the process, Parent said other supporters are too intimidated by the opposition to voice their support.

“They’re intimidated by [the signs and letters] and I understand it,” he said. “I understand why some of those people don’t want to be here, and we have to represent them, too.”

Parent recommended an advisory referendum be put on the April ballot, then suspended further discussion of the core extension and image corridor.

“We’re gonna get this decided once and for all,” said Parent. “It’s not gonna be decided by the people who own a two-acre parcel of land out in the middle of nowhere.”

In an interview after the meeting, Parent said his decision to take the process in a new direction was a reaction to the signs and a letter to the editor.

“I just felt like, even if the board has the right to just shove this through, that no matter what we do there are just too many people out there who are going to keep this stuff up,” he said. “We as a board began to question whether we really had the support of the town on this, so maybe we better ask the people. If this thing comes back and we get blown out of the water at least we know.”

The town board has until Feb. 23 to finalize how the non-binding referendum question or questions will be phrased on the April ballot.

Since the core controversy became a hot topic in the summer of 2009 the town board has struggled to clarify issues surrounding the debate.

Many people are opposed to the expansion because they want to see the natural aesthetic of the entrance to town preserved. However, the property at the center of the debate owned by Joe Parent is already zoned for development. Parent purchased 80 acres between Summit Road and County E in June of 2007. The northerly 40 acres are zoned for high-density residential development, while the southerly 40 acres are zoned for single-family residential development on 20,000 square-foot lots.

That means that whether the core is expanded or not, Parent can build a substantial development on that property as it is zoned now.

Because Joe Parent is the father of James Parent and his property is the largest included in the proposed core extension, some residents have raised questions about James Parent’s role in the debate. Parent has recused himself from some votes and discussions on the matter, but he has stepped back in on others. Though Parent denies any impropriety, he acknowledges that it does raise questions.

“I’ve been advised by our town attorney that it’s not technically a legal conflict, but there’s the obvious appearance of one,” he said.

In some instances he said he has taken part because there was confusion among other board members about how to proceed.

In any case, Parent said it’s important to remember that the initial discussions about expanding the town core took place two years before his father bought the property.

“Those meetings were posted and nobody showed up,” he said. “Nobody said anything to us about it until 2009.”

The minutes show that the town board and plan commission, either separately or in joint sessions, discussed the expansion of the core in October, November, and December of 2005, and again in November of 2007. However, the town neglected to record changes to the core map with the Door County Planning Department, which has zoning jurisdiction over the town.

It wasn’t until after a March 9, 2009 meeting that the town sent a recommendation for an extended town core to the Door County Planning Department. That came after the planning department requested a final core map for inclusion in the Door County Comprehensive Plan 2030.

The expansion became a hot issue when the Door County Planning Department held a series of open house sessions to finalize the plan in August of 2009. That’s when many Baileys Harbor residents first noticed the expanded core district.

After receiving dozens of letters and public comments against the expansion, the Door County Board of Supervisors’ Resource Planning Committee (RPC) voted unanimously against the expanded core area at a Sept. 23, 2009 meeting.

The RPC essentially told the town that the decision should have been made with more public input.