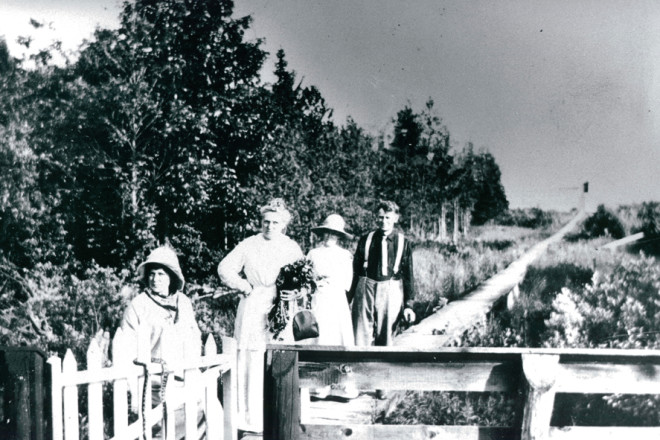 Captain Justice Bailey was lucky. In 1848 he escaped a storm on Lake Michigan by guiding the Gazelle safely into the harbor that would later bear his name, escaping the fate of an estimated 31 other vessels that wrecked or stranded on the treacherous outer reef that is covered by very shallow water.

Baileys Harbor soon became a busy place – the only harbor of refuge north of Milwaukee and a major shipping point for lumber and stone. As boating tragedies piled up, the federal government awarded a contract to Alanson Sweet, the owner of the Gazelle, to build a lighthouse on an island at the southeast edge of the harbor. The 40-foot circular stone structure with an iron top that resembled a birdcage went into service in 1852. 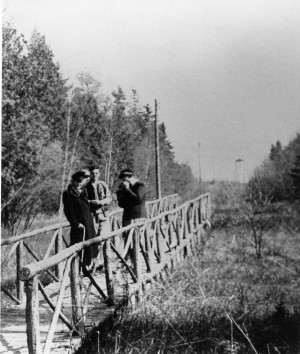 Since it did not mark the deep channel, it did little to ease the dangerous situation, and in 1868 Congress appropriated $6,000 to build a lighthouse on Cana Island and the two range lights that are now part of the Ridges Sanctuary just north of Baileys Harbor. They went into service in 1870, and the “birdcage” light was decommissioned. Today, it is privately owned and can only be viewed from the water.

The Upper Range Light was located atop a seven-room frame home for the keeper, with an attached shed for a kitchen. A rectangular tower that projected from the gabled roof included a large window through which a Fifth Order Fresnel lens from Paris beamed a steady white light toward the harbor. It could be seen for 13 miles.

Just less than 1,000 feet to the south, the Lower Range Light was housed in an eight-foot by eight-foot wooden structure topped with an octagonal tower that held another Fifth Order Fresnel lens. Its steady red beam was visible for 11 miles. The upper light was 17 feet higher than the lower. Ships entering the harbor aligned the lower red light below the white and followed the deep channel into port.

The first of eight keepers of the range lights was Fabien Truedell, who began work on December 1, 1869. Although 74 when he accepted the post, he was a hardy fellow and up to the task of carrying kerosene to the lower light, down the long boardwalk between the two buildings.

Marcus Shaler replaced Truedell in 1872. His wife, Lucy, was a victim of the typhoid outbreak in the winter of 1874-75. Overcome with grief, he soon resigned. Joseph Harris, Jr., son of the founder of the Door County Advocate, manned the lights from 1875 to 1881, and his daughter, Mabel, was the first baby born in the keeper’s home. Ironically, Harris’s father was a strong promoter of the Sturgeon Bay Ship Canal that by 1890 enabled much of the shipping trade to bypass Baileys Harbor. 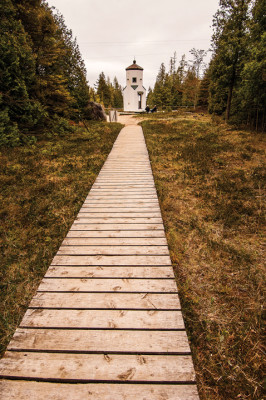 Henry Gattie became the keeper of the Range Lights in 1896 and held the post for 27 years. A handsome bachelor when he moved into the keeper’s house, his social activities were eagerly followed in the Advocate until he married Eva Hendrick of Baileys Harbor on February 18, 1901.

The Advocate reported that the Duclon Orchestra, composed of members of the family that lived in the Eagle Bluff Lighthouse, played at a ball in the newlyweds’ honor. Guests who partied into the wee hours expressed regret that the Gatties could not be married at least once a month. Dawn Holsen of Manitowoc, Gattie’s great niece, notes that the sled he built to haul supplies from Baileys Harbor in the winter now hangs on the wall of the Maritime Museum in Sturgeon Bay.

When the Range Lights were converted to an unmanned acetylene gas system in 1923, Gattie was transferred to Cana Island. In 1930 the lights were wired for electricity, and the keeper’s house, shuttered for seven years, became the parsonage for Immanuel Lutheran Church. The rent was $20 a year, and the pastor was responsible for minor maintenance of the lights. He was likely the only person in the country to be classified as an official U.S. Lighthouse Keeper, as well as a preacher. Sunday school classes for children were held in the basement.

The Reverend Robert Girod occupied the keeper’s house from 1944 to 1953. He and his wife, Helen, fought a brush fire that threatened their home in the late 1940s. When they failed to get it under control, Girod called the fire department garage. The only person there, a mechanic’s helper, was reluctant to leave the building unattended, but finally came roaring up in the 1932 Ford fire truck. He didn’t know how to run the pump for the 500 gallons of water the truck carried and, by the time he figured it out, so much pressure had built up that it blew the hose off the truck. The story was hushed up, Girod said, because they didn’t want people to think the fire department was undependable.

The inside walls at that time were painted a dismal grey, and the surrounding trees kept the house in shadow. Helen secured permission to wallpaper the rooms, and Hattie Peil and Grandma Oldenberg volunteered to do the work. Heating the uninsulated house in the winter was another problem. Even with a wood stove in the kitchen, Helen reported that spilled water froze on the floor.

In 1934 the Bureau of Lighthouses deeded the 40-acre site to the Door County Park Commission. The commission promptly outraged the community by deciding to allow a trailer park to be built atop the 25 species of orchids and other rare plants that grew there. Trees were actually being felled and land leveled for roads when Emma Toft made her famous stand in front of the bulldozer. The protest she led evolved in 1937 into the forming of the Ridges Sanctuary. 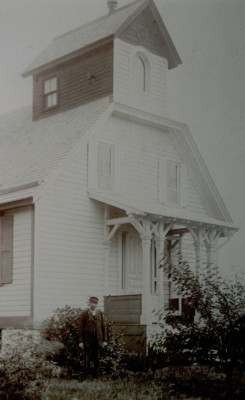 In 1955, after the church’s use of the keeper’s house ended, the Coast Guard took bids for renting it to the public. Ruby Golke and her children, James and Barbara, won with a bid of $15 a month. James’ niece, Kandie Skippon of Jacksonport, remembers his telling about another fire that threatened the house when he was 13. The Baileys Harbor fire truck again responded, but got mired in mud. The family moved when James began college in 1962, and the house again sat empty.

In 1964, Roy Lukes, a teacher at the Door-Kewaunee County Teacher College in Algoma, was hired to lead guided tours and present nature programs at the Baileys Harbor Town Hall. He was the Ridges’ first paid employee, and in 1966, when he was hired to teach middle school science at Gibraltar, he was given permission to move into the deserted keeper’s house.

In his 1988 book, The Ridges Sanctuary, Lukes described the condition in which he found the property:  “Not a single door in the house closed properly. Paint had peeled badly; the toilet had frozen and cracked. The living room and bathroom floors needed covering, and the dirt was ankle deep.”

The 100-year-old house had a narrow escape a few years later when it was hit by a lightning bolt that threw Lukes across the room, set curtains on fire and blew the door off the fuse box.

Smelling cigarette smoke in the house when he came home from school one evening in 1969 and knowing that the Coast Guard had the only other key, Lukes discovered that the 100-year-old crystal lamps that magnified the lighthouse beams had been removed from both the upper and lower lights. This was the first clue that a metal directional light tower was to be installed across Ridges Road from the lower light.

In 1972, Lukes, who by then had been named the Ridges’ first executive director, married Charlotte Koch. When they moved to their own home in 1982, the keeper’s house became the Ridges office. The Range Lights were added to the National Register of Historic Places in 1989. Steve Leonard, the Ridges’ current executive director, says the kitchen where Helen Girod reported that spilled water froze on the floor is now a conference room (and he says it’s still pretty chilly in the winter). 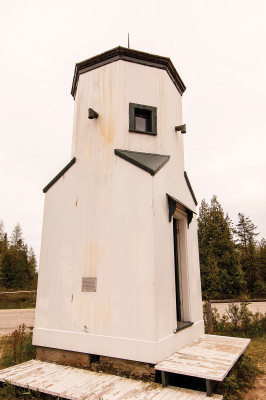 Eventually, a new building on the site of the Sandpiper Restaurant will hold offices for the Ridges’ staff and an interpretive center. The old keeper’s house will become a historical center, open to the public so they can see the history of the Range Lights inside and out.

“We get so many visitors,” Leonard says, “who are disappointed that they can’t go up in the tower.” At present, the Range Lights are open only during the annual Lighthouse Walk in June. Although the Fresnel lenses are long gone, other lights were installed in the lantern rooms in 1996 and are lit occasionally.

The Ridges Sanctuary by Roy Lukes, 1988

The 1,600-acre Ridges Sanctuary nature preserve says it’s time to step out of nature and into the Baileys Harbor community, connecting the two at the intersection of Ridges Road and Highway 57.

In May 2013, Executive Director Steve Leonard announced “Bringing Nature to Life,” a $3.5 million fundraising campaign to build an interpretive center, new trails, and restore the historic Range Lights. Leonard sees the 7,000-square-foot, LEED-certified, interpretive center as a gateway to nature.

“It’s not so much about the building, but the building as a launching pad to get people outside,” he says. “We have got to get that next generation involved in nature.”

The campaign was kicked off with a $1 million posthumous gift from longtime Ridges member Chester Cook, who was a young man when he worked with biologist Albert Fuller in documenting the diverse flora and fauna of the area. The interpretive center will be named the Cook-Albert Fuller Center in the men’s honor.

Since then, the center has raised $1.4 million and hopes to raise the remaining $1.1 million by the end of September in order to break ground in spring 2014. 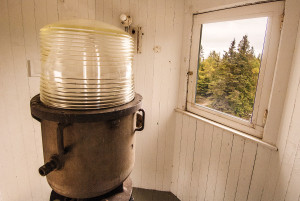 The sanctuary preserves a series of 30 ridges and swales formed by the continual rise and fall of Lake Michigan during the last 1,400 years. The ridges and swales create the biological diversity the preserve is famous for, and the new initiative would restore and extend those ridges and swales right up to and into the interpretive center, creating what Leonard calls “a screen door to nature.”

Leonard believes it’s critical for the organization to embark on a renewed effort to make a physical connection with the community.

“This was the place where everyone went ice skating as kids,” he says. “At some point we took that away, and it became very hands off. It was once a place for kids to explore. We have to get back to that.”

“As conservation organizations we put ourselves at risk by not supporting these towns,” he says. “We need to step into our community. We can use this to tell The Ridges cultural history, but also tell the Baileys Harbor history. Instead of The Ridges being its own story, and Baileys Harbor being its own story, we can bring them together into one story.”